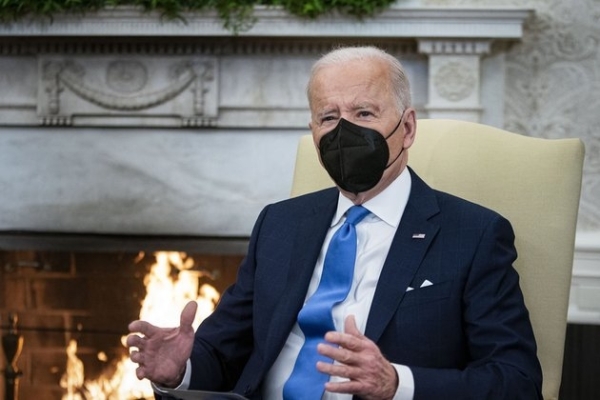 US President Joe Biden threatened on Monday to shut down Nord Stream 2, a crucial Germany-Russia pipeline, if Russian troops cross the border into Ukraine. Biden made the threat as he was speaking alongside German Chancellor Olaf Sholz at the joint press conference in the White House on Monday.

"We will bring an end to it," Biden said of the pipeline. When grilled by a journalist on how exactly Washington would be able to block the project since it was "within Germany’s control," Biden refused to elaborate, saying only: "We will, I promise you, we’ll be able to do it."

It remained unclear, however, if Scholz was on board with the idea. When asked directly about the fate of the project if Russia invades Ukraine, the German leader refrained from mentioning the pipeline by name.

"We have intensively prepared everything to be ready with the necessary sanctions if there is a military aggression against Ukraine," the German Chancellor said, adding that he won’t go into specifics "because Russia should understand that there might be even more to come."

The Nord Stream 2 natural gas pipeline has already been completed, but is still awaiting a go-head from German regulators. The approval of the project was suspended mid-November.

Biden and other White House officials have warned in recent weeks of an imminent invasion of Ukraine by Russia, citing troop movements in the region. Moscow has consistently denied it is preparing for an invasion, dismissing all the reports that a military conflict was all but inevitable as fake news.

Biden himself admitted he does not know what Russian President Vladimir Putin is planning, but still argued that an actual invasion could be something Putin is weighing in.

"I don’t know that he knows what he’s going to do," Biden said of Putin, promising to slap "most severe sanctions that have ever been imposed" on Russia if the country invades Ukraine. The US president said the sanctions would have a "profound impact" on Russia’s economy, particularly gas exports.

"It’s the only thing they really have to export," Biden said, insisting Germany is an "incredibly reliable ally" which would support the pipeline decision. The president also claimed a "significant portion" of gas exports lost due to Russian sanctions could be made up for, without providing any specifics of how he plans to compensate Germany.

The US leader also urged Americans in Ukraine to leave the country amid growing tensions. Asked if Americans should be leaving Ukraine amid the US sending troops to the region as well as supplies, Biden said it would be "wise" for Americans not on diplomatic business to do so.

"I think it would be wise to leave the country," he said.