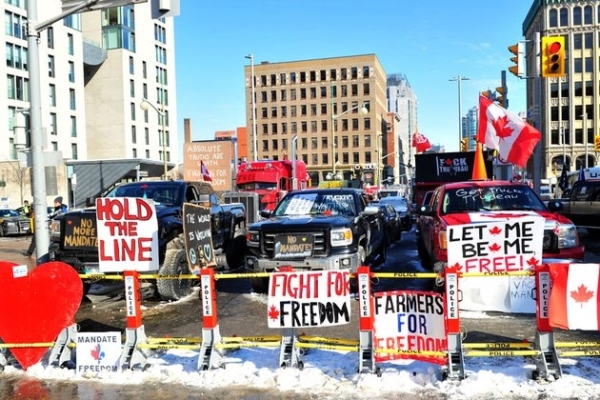 Canadian truckers ordered to keep horns silent at all hours

A judge in Ottawa has issued a 10-day injunction order for some parts of the Canadian capital, which requires truckers not to use their horns as an act of protest. This will not infringe on their right to protest against mandatory vaccination against Covid-19, Justice Hugh McLean decided.

"Tooting a horn is not an expression of any great thought I’m aware of," the judge said during a hearing on Monday as cited by Canadian media.

The ruling applies to all hours and was placed into force for the zone north of the Queensway. It authorizes police to arrest anyone they believe to be aware of the injunction and be witnessed violating it. The rule will remain in place until at least February 16, when the court is to convene again after a period of adjournment to further discuss the issue.

The motion to ban honking came out from a proposed class-action lawsuit filed with the Ontario Superior Court of Justice last week by public servant Zexi Li. She seeks Can$9.8 million (US$7.7 million) in damages for emotional and mental distress allegedly caused to her and other potential plaintiffs by the so-called Freedom convoy. Protesting truckers are honking 12 to 16 hours a day, making residents in downtown Ottawa a living hell, the filing argued.

A lawyer representing three protest organizers argued at the Monday hearing that the convoy is a grassroots movement and that many people in Ottawa "don’t feel they’re being harmed and this is part of the democratic process," contrary to what the other side said. The judge was not convinced by his reasoning.

The anti-mandate protest has paralyzed the area around Ottawa’s Parliament Hill. On Sunday, the city declared a state of emergency, ramping up the police crackdown on the demonstrators.

Mayor Jim Watson compared the actions of the truckers to a "siege" and an "insurrection" and said the honking was "tantamount to psychological warfare" against residents.

Steve Bell, Ottawa deputy police chief, welcomed the court injunction, saying the force will assess their "ability to enforce [it] at different points and at different times to make sure that we’re having the most impact we can."