US embassy in Ukraine may relocate media 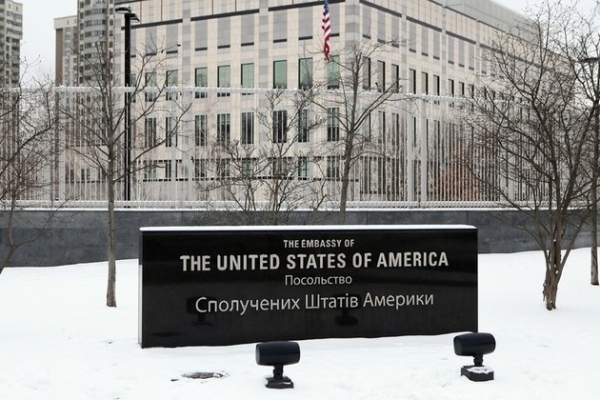 Officials are considering plans to move westwards, citing threat of an invasion, according to BuzzFeed

America’s embassy in Kiev is reportedly considering packing up shop and relocating to the West of Ukraine over fears of a supposedly looming Russian attack, Buzzfeed has claimed.

In an article published on Monday, the American news site said that it had received information from "a source with knowledge of the talks" supposedly taking place among American diplomats in the Ukrainian capital, who are said to be mulling a move elsewhere as they "consider contingency plans for a possible Russian attack."

"The west of Ukraine is bordered by allies, NATO and it doesn’t provide Russia [with] an easy strategic invasion," the outlet wrote.

"While the embassy has not made any decisions on the matter, relocation to someplace in western Ukraine is actively being discussed," BuzzFeed claimed, citing the unnamed source.

However, a State Department spokesperson told the New York-based media company that "we have nothing to announce at this time," and that the embassy in Kiev remains operational for most consular services.

The report comes amid an increasingly tense situation on the shared frontier in recent weeks, with Western leaders repeatedly warning of a purportedly impending Russian invasion. On Sunday, Fox News claimed that Chair of the Joint Chiefs of Staff General Mark Milley had cautioned lawmakers earlier this month during closed-door briefings that Kiev could fall in as little as 72 hours should Moscow’s armed forces wage an incursion.

In late January, the State Department authorized the departure of its staff in Ukraine "out of an abundance of caution due to continued Russian efforts to destabilize the country and undermine the security of Ukrainian citizens."

The Kremlin, however, has denied it has any plans to order an offensive, and instead accused English-language outlets of whipping up "hysteria."

Some of Kiev’s top officials have attempted to calm fears of a looming attack. Minister of Foreign Affairs Dmitry Kuleba urged citizens to ignore "apocalyptic predictions" that war is on the horizon, insisting that "Ukraine has a strong army, unprecedented international support, and Ukrainians’ faith in their country."