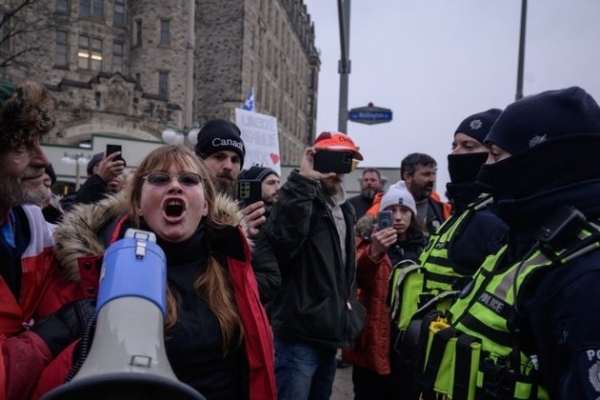 A Canadian judge on Friday ordered protesters to end their 5-day-old blockade of the Ambassador Bridge, the busiest border crossing between the U.S. and Canada.

The virtual hearing before Chief Justice Geoffrey Morawetz of the Ontario Superior Court lasted 4½ hours. Afterward, he said the order would go into effect at 7 p.m. local time to give protesters time to leave.

The protesters, who have blocked the bridge between Windsor, Canada, and Detroit, Michigan, since Monday, mostly with their pickups, say the ruling is counter to their right to peacefully protest vaccine mandates.

It is not clear whether law enforcement will try to remove the protesters, but the Windsor police warned that they could be arrested and their vehicles could be seized.

About one-fourth of all trade between the U.S. and Canada crosses that bridge every year, and the blockade has forced trucks to use other bridges. On the U.S. side, it has also led to a shortage of auto parts that has closed auto manufacturing plants or canceled some work shifts.

Earlier Friday, Ontario Premier Doug Ford declared a state of emergency because of the truckers’ protests.

Over the past two weeks, hundreds of truckers have snarled the streets around the Parliament building in the national capital of Ottawa. More recently, they blocked Ambassador Bridge.

Ford said he would convene the provincial Cabinet on Saturday to make ‘crystal clear’ the truckers are breaking the law by blocking critical infrastructure.

He said punishments for failing to comply could include fines of up to $10,000 and up to a year in jail.

’We are now two weeks into the siege of Ottawa,’ Ford said. ‘It’s an illegal occupation. It’s no longer a protest.’

During a Friday call, U.S. President Joe Biden and Canadian Prime Minister Justin Trudeau agreed that ‘the actions of the individuals who are obstructing travel and commerce between our two countries are having significant direct impacts on citizens’ lives and livelihoods,’ according to a White House statement about the call.

The protesters say lifting the mandates is all that needs to be done.

One protester told Fox News he’d been at the Ottawa protest the entire time and was there with his wife and kids.

He said he didn’t want his kids to be forced to wear a mask or get vaccinated.

’The pressure we have to get vaccinated, there’s something about it that just don’t work,’ he said. ‘End all the mandates, and it’s going to be all right.’

Since the protests began, several Canadian provinces have dropped mask and vaccine mandates or signaled that they will soon do so.

Trudeau has called the truckers a ‘fringe’ group.

On Thursday, Ford asked a court to freeze online fundraising for the protesters via a site called GiveSendGo.

In a tweet, the American company said, ‘Know this! Canada has absolutely ZERO jurisdiction over how we manage our funds here at GiveSendGo. All funds for EVERY campaign on GiveSendGo flow directly to the recipients of those campaigns, not least of which is The Freedom Convoy campaign.’

Some information in this report came from The Associated Press and Reuters.