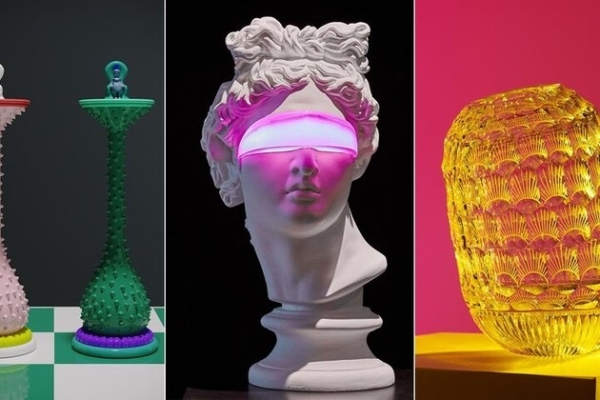 From a crypto-chess set to recycled carved window surrounds: These designs of interior items and furniture redefine national traditions and utilize new technologies. 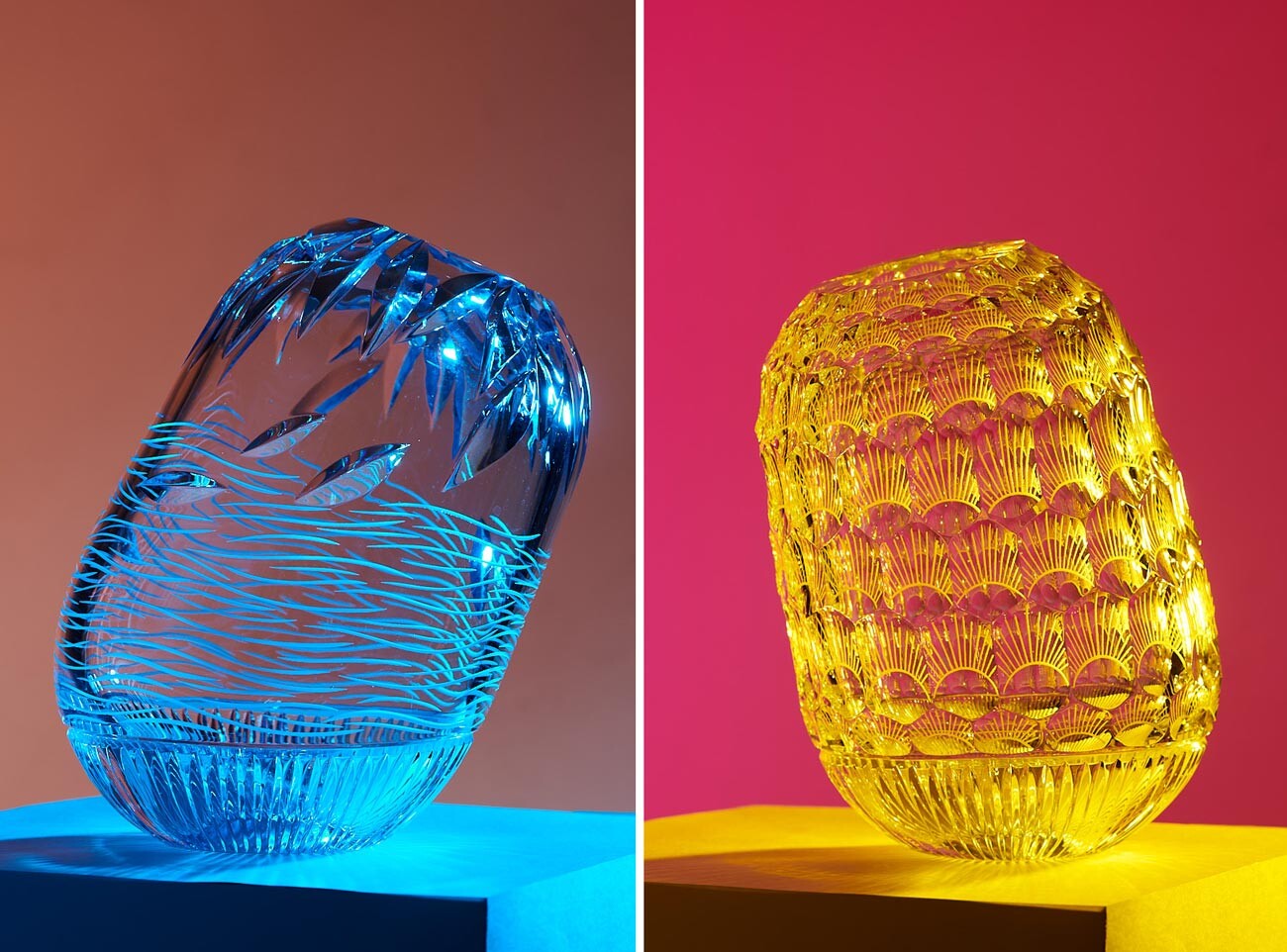 The "Four Seasons" series comprises four crystal vases with different designs — snowflakes, petals, flecks of sunlight, and leaves. It was inspired by the year 2020, a difficult time when we mainly ended up watching the changing of the seasons from our windows. Treivas Architecture Studio, led by architect and artist Olga Treivas, is giving new meaning to the very nature of the material.

Crystal glass is traditionally associated with fragility, but these objects, on the contrary, seem monumental and even brutalist. In addition to showcasing the material, the designers offer a different perspective on its cultural background. In the USSR, crystal glass was not only a synonym for a stock item in short supply, but also a symbol of celebration and enchantment. The series was produced in collaboration with Irina Baranova’s Business Laboratory B.Lab and manufactured at the historic Gusev and Bakhmetev crystal factories. 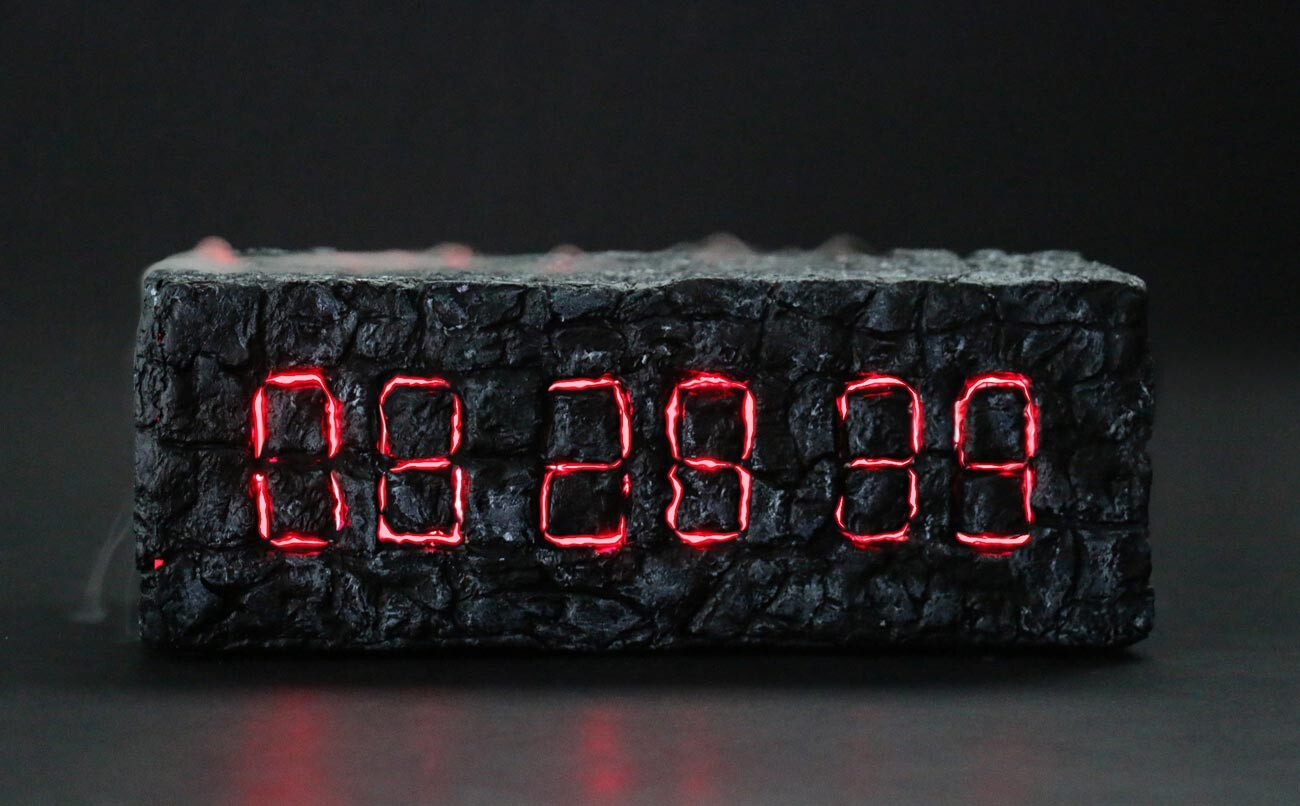 Vadim Kibardin has launched the production of "Spiritus" by KIBARDIN. It was patented by the designer and integrates several functions: an aroma diffuser and an electronic clock with smart controls. The device is enclosed in a case imitating charred wood (in the style of the traditional Japanese technique of yakisugi) and incorporates LED illumination, producing an almost magical effect. You can set different times for the operation of the diffuser — (which has a 300 ml reservoir) — from 30 to 180 minutes. 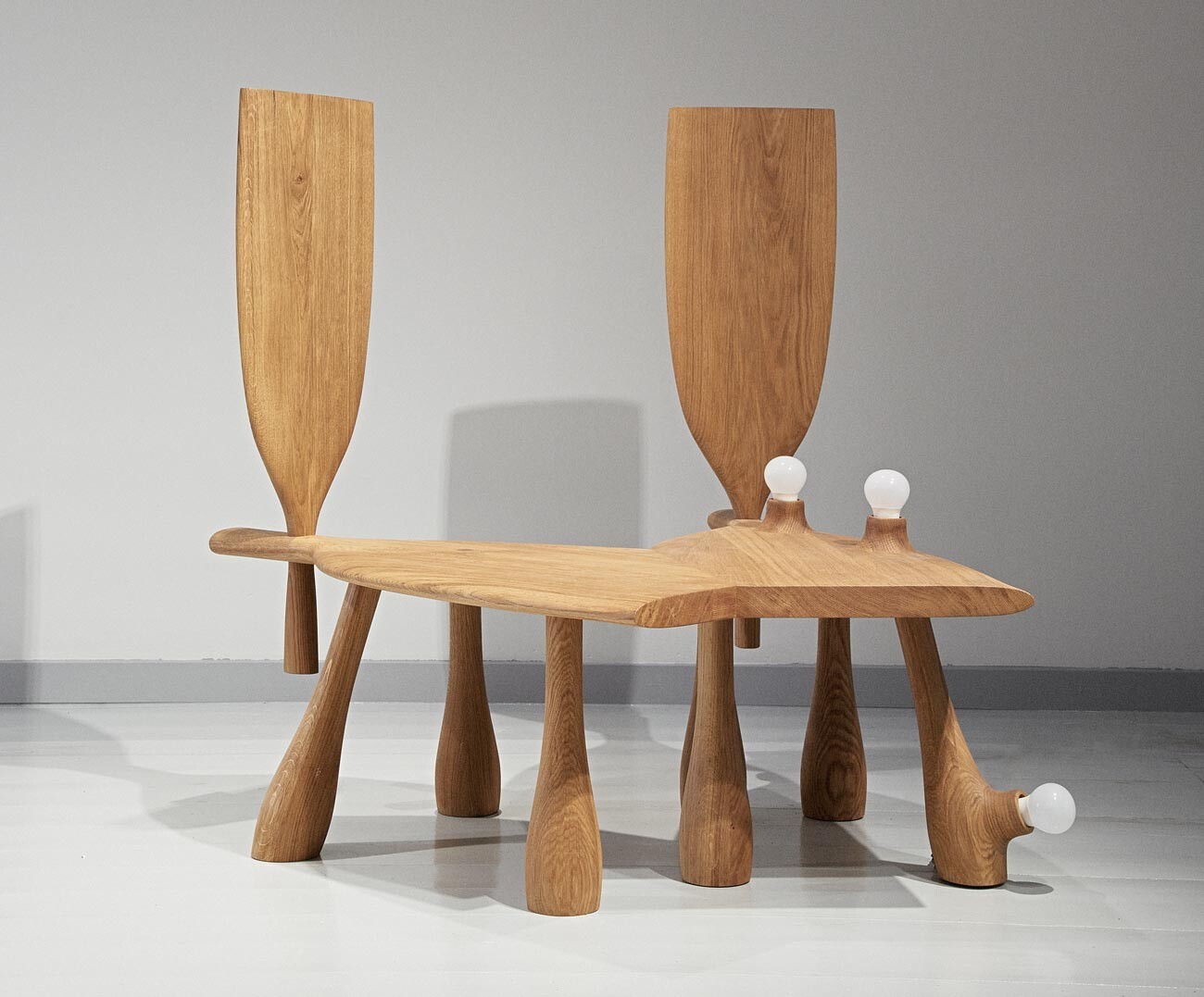 This designer works in a style that could be described as "emotional recycling". Her designs "give a new lease of life" to childhood memories and objects from the past. For example, the "BABUSHKA" [Grandmother] collection is inspired by daily life in the village house of Olga’s grandmother. The furniture design is reminiscent of the shovel-like implements used for making bread in a Russian stove, or the old spinning wheels. The series conveys an atmosphere of childhood tranquility and the warm glow of home. It includes seven differently shaped benches made of oak. They come in limited editions of 20 pieces each. They can also be found in European design galleries — Mia Karlova Galerie (Amsterdam) and Armel Soyer (Paris). 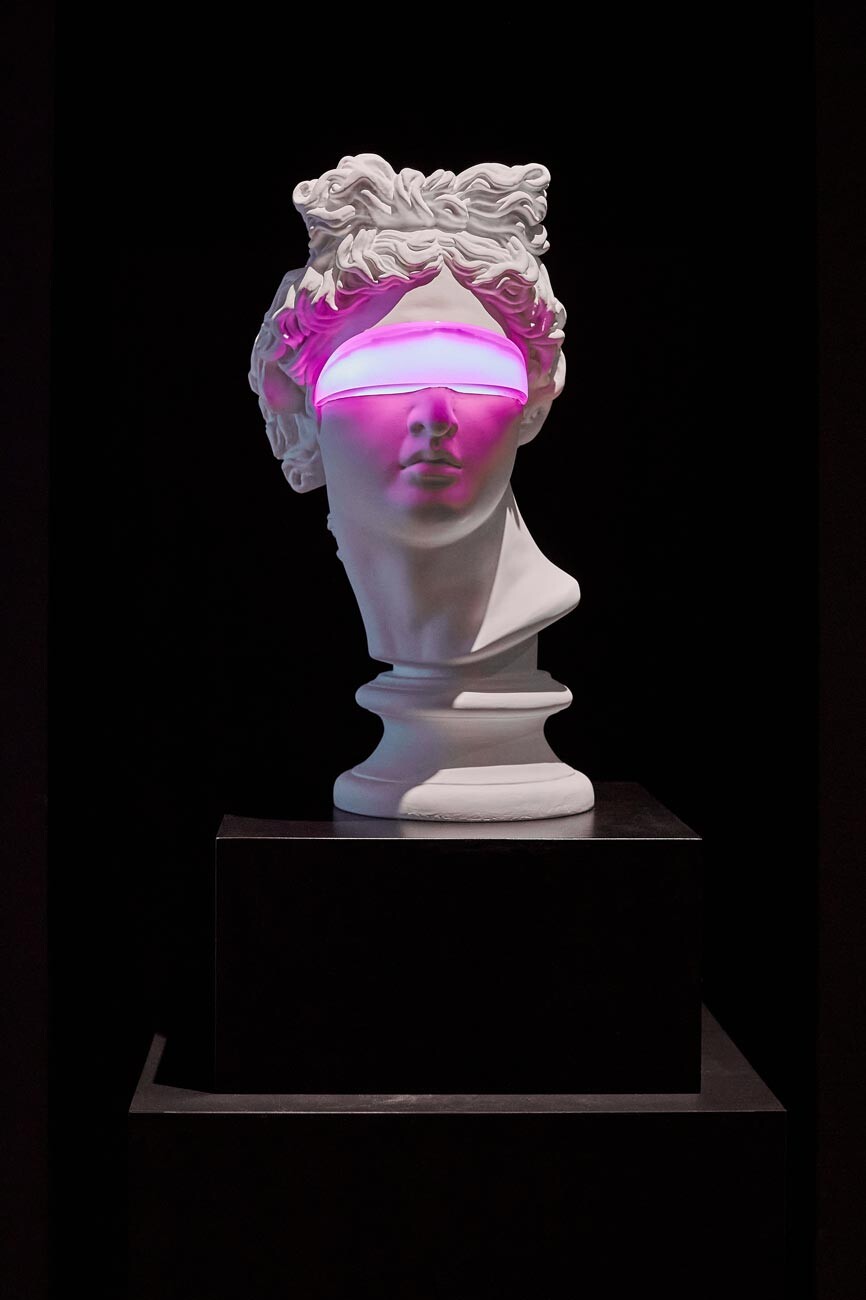 Behind the eye-catching art object of gypsum and optical plastic is a whole philosophy. New Look is a response to our changing reality. The designers describe their work as a reflection on the theme of the new perception of the world common in people’s minds today and which has been formed through the prism of social networks and total digitization.

5. Display cabinet, Made in AUGUST 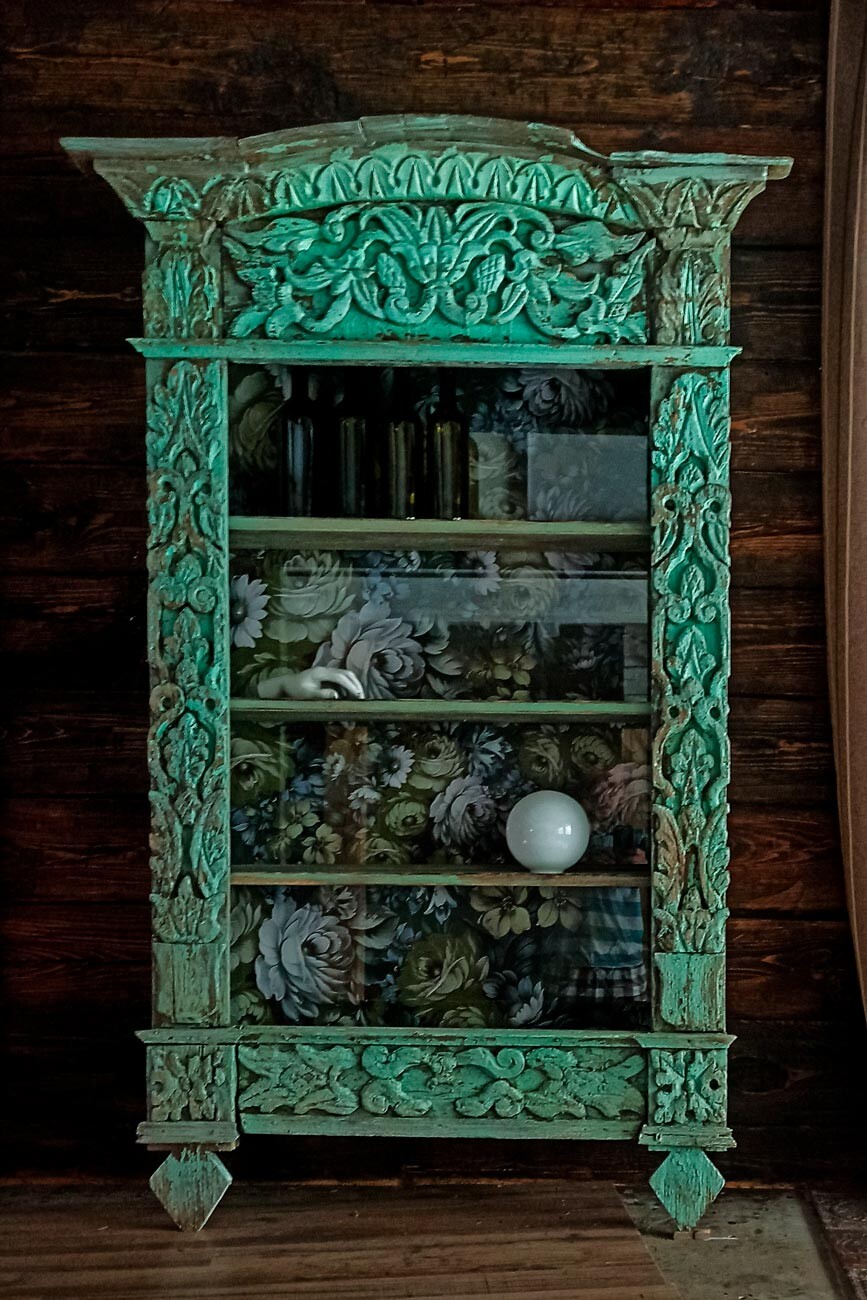 Vitaly Zhuykov’s design laboratory, Made in August, operates at the intersection of handicrafts and new technologies. For example, the regularly updated "Portal" collection includes unique objects of interior design in the spirit of "local history recycling": They are made of old carved window frames. For instance, this unique display cabinet is made of a restored carved window frame of the early 20th century from the town of Gorodets, historically known for its wood carving. On the inside, the cabinet is decorated with Zhostovo painting (UG-ART HOME DESIGN workshop).

6. Rug from the "Hear my Roooar" collection, by Andrey Budko 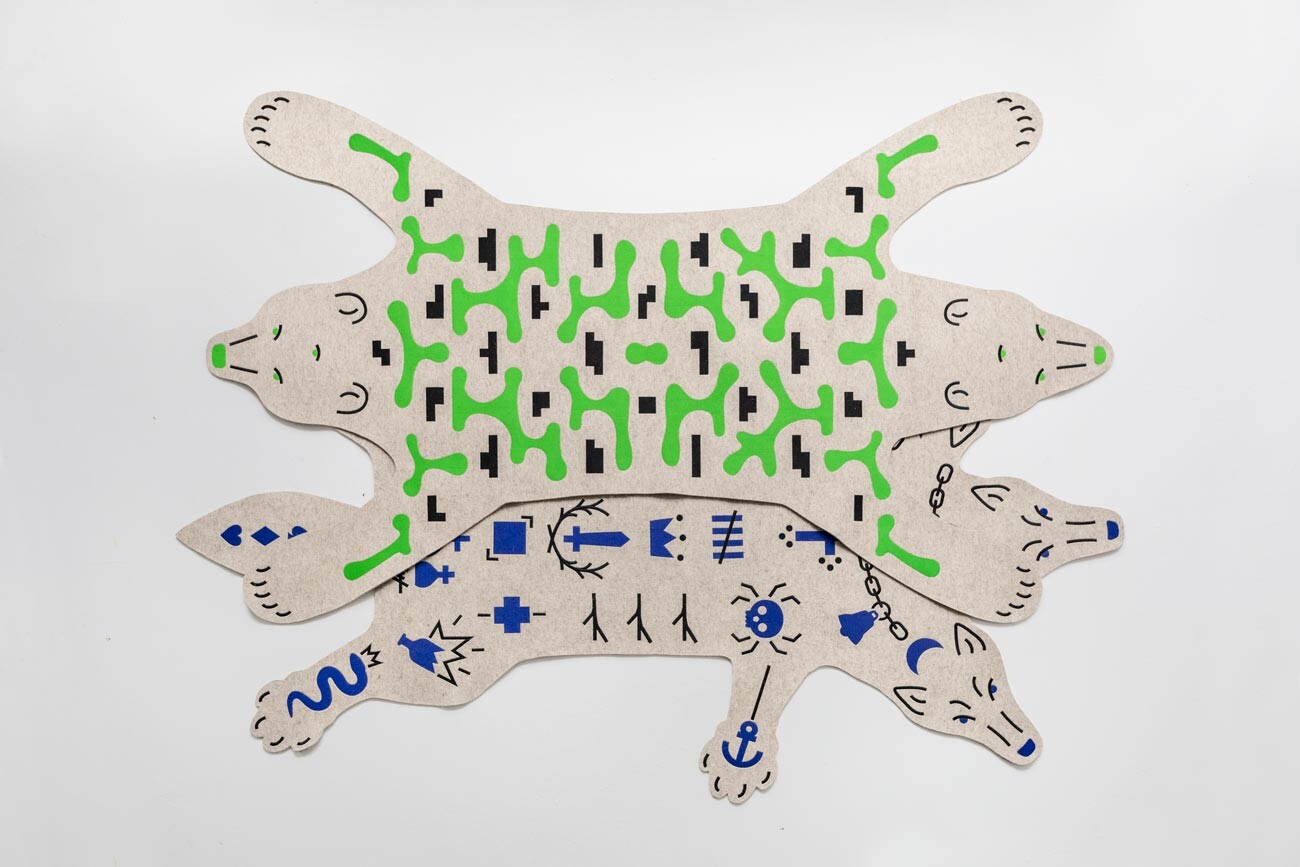 Andrey explores variations on the theme of wool felt rugs, a traditional Russian material. They are decorated with digital prints created with the help of machine embroidery. The prints reference the type of embroidery that once adorned traditional folk costumes. Each design depicts a pattern associated with superstrength: camouflage masks the wearer and therefore confers an advantage in battle; while tattoos (as on the skin of the wolf) serve as a protective talisman. 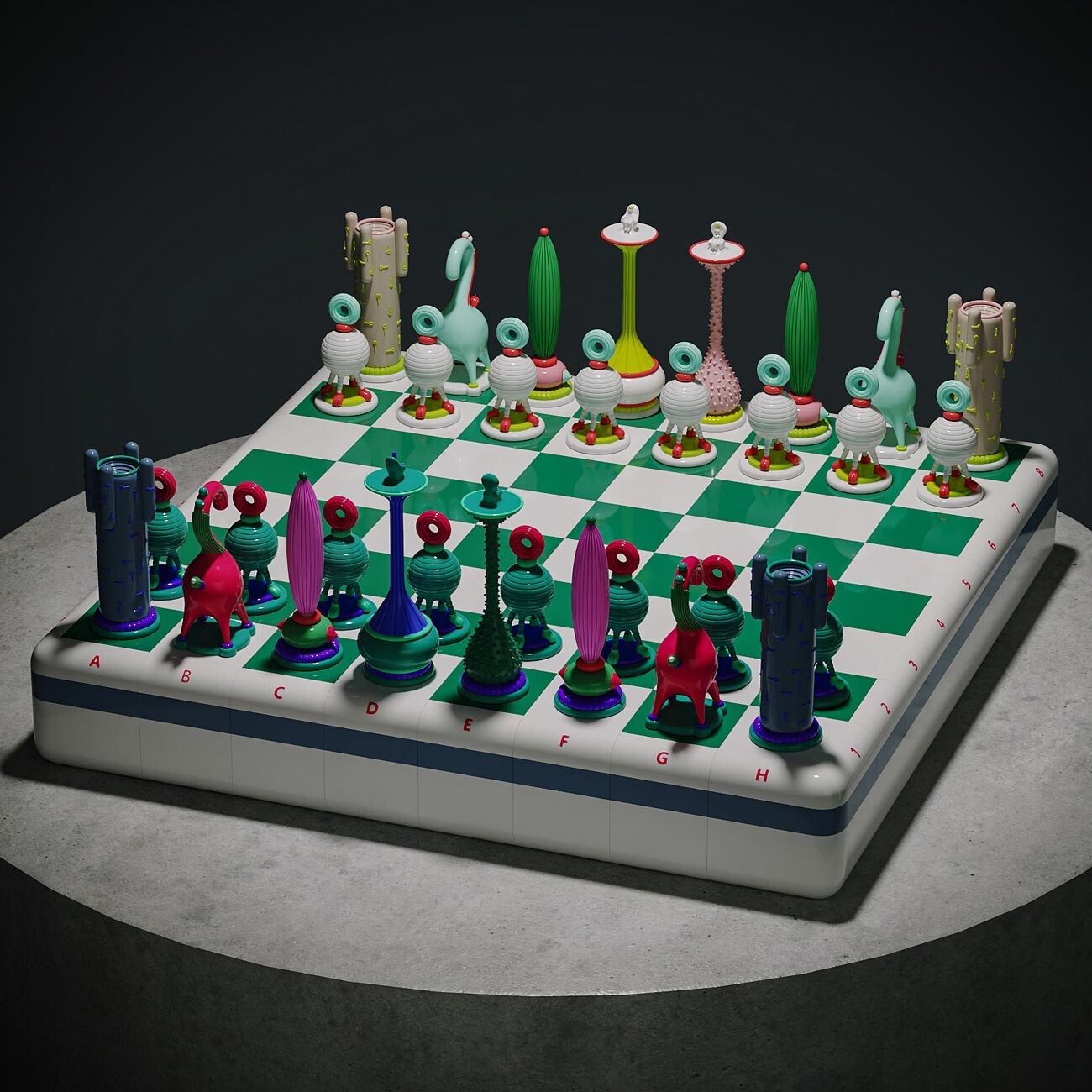 Zheltyshev was the first on the Russian art scene who used NFT technology in the making of object art. Taras conceived the idea of a high-tech chess set embedded with microchips serving as a permanent virtual "manufacturer’s certificate" designed to track the product’s authenticity in digital space. The designer worked with developers in Hong Kong. He believes that the new lexicon of decorative design is all about "tokens" and "blockchains". The chess sets are a limited edition of 20. The meticulously made figures are created by high-resolution 3D printing and are finished by hand. 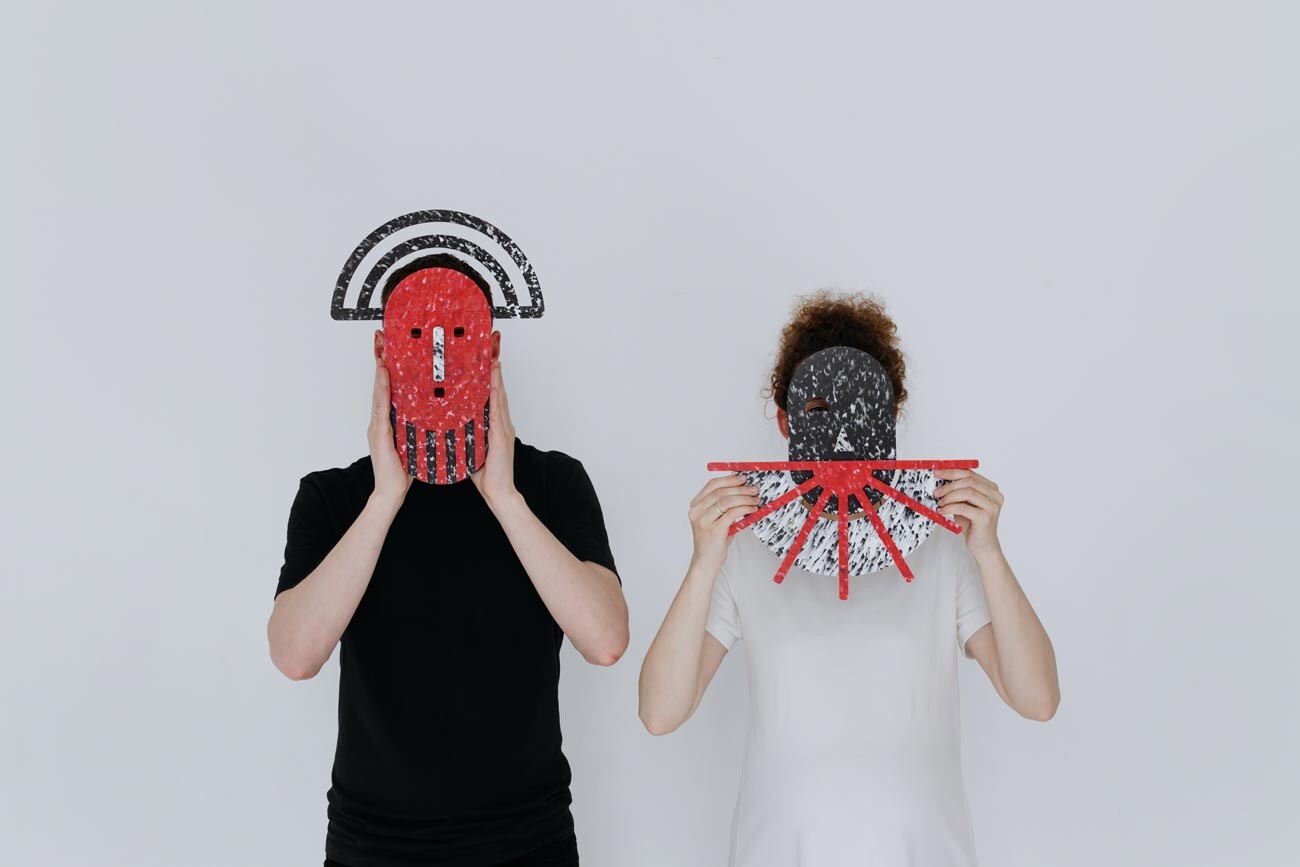 These masks made of recycled plastic were among the finalists in the international Ro Plastic Prize 2021 devoted to objects of recycled or recyclable plastic. The collection, called "RE:d totems", is made up of eight designs inspired by Slavic ritual tradition. Here, the past meets modernity: masks that would once have been made of twigs, birch bark and ribbons are today created from recycled plastic that can again serve people. 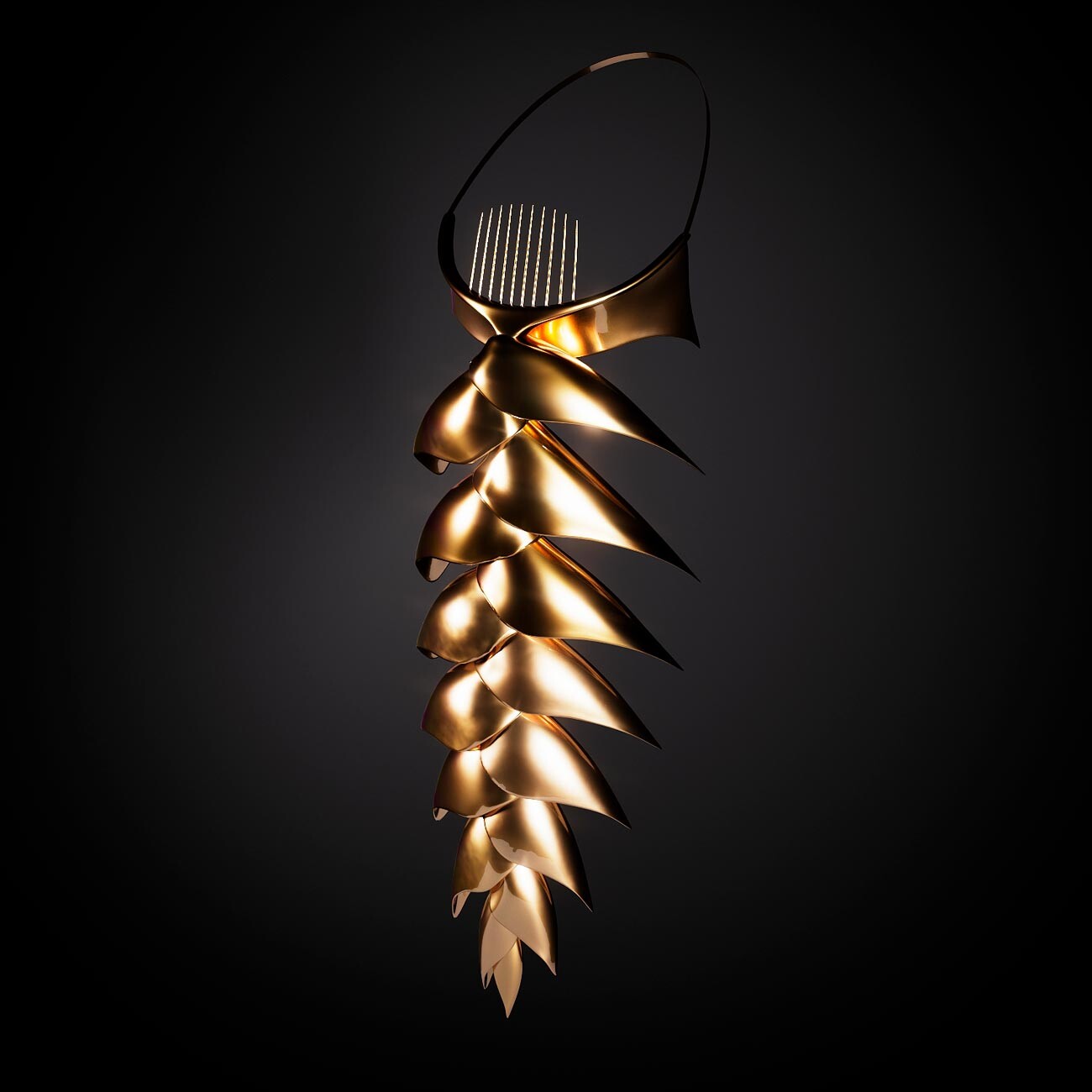 This artist and designer frequently turns to his Russian roots to rethink national cultural patterns. Last year was memorable for the launch of his collection of hair combs for the new Moscow jewelry brand, Bun Jewellery. In his quest for a new cultural code, he created a traditional Russian hair ornament in a modernist spirit. 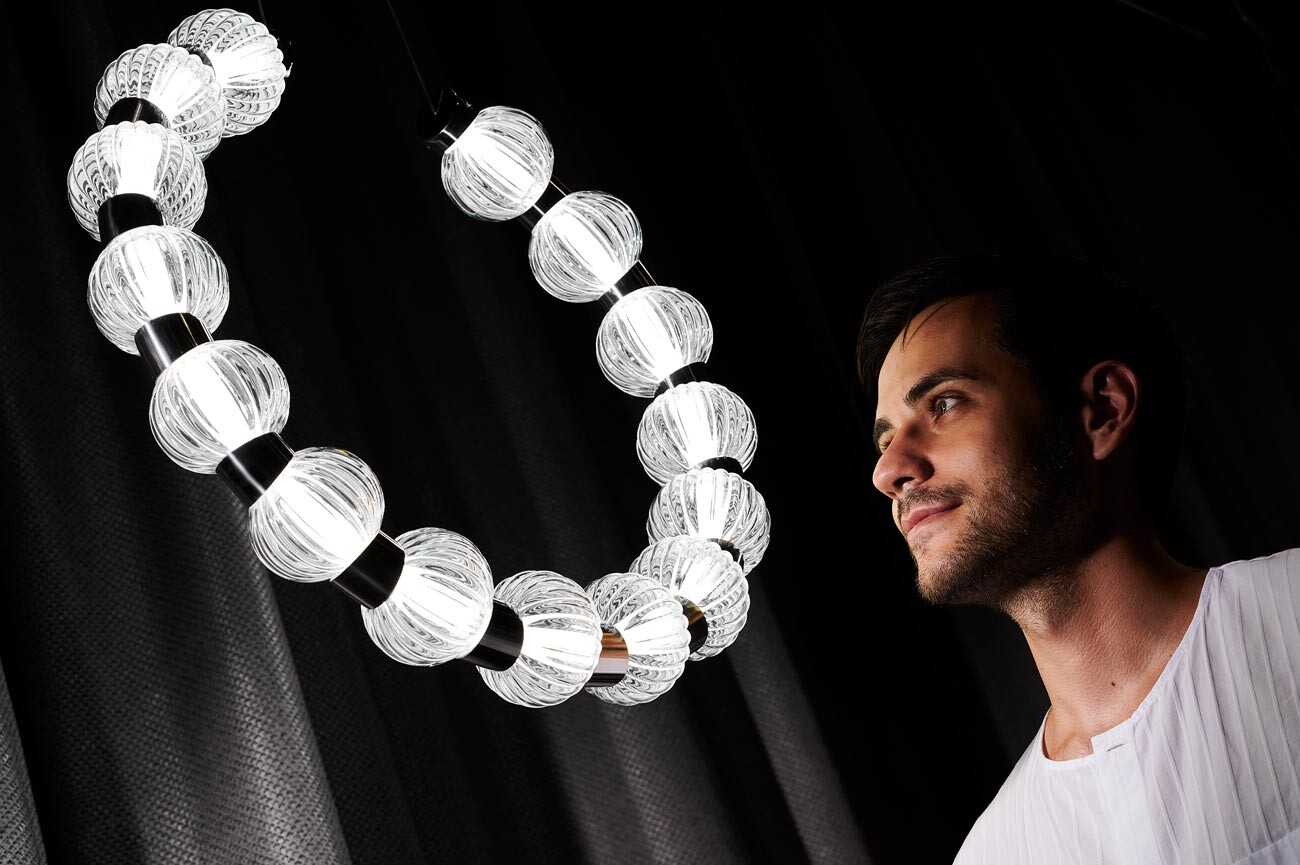 In the past year, Alexey’s work has been recognized with a dozen or so prestigious design awards, the IDA International Design Awards 2021 among them. The suspended light is inspired by the ornaments of the ancients, which had a sacred significance and served as amulets. While in the past they were threaded with shells, today modern technologies are used. Thus, the light is fixed to the ceiling with magnets, and power is directly supplied through the wires on which the object is suspended. As a result, the light avoids looking bulky, but appears light and compact. The frame’s LED strip serves as the light source, and the decorative elements are composed of "beads" of blown glass.

Please enable JavaScript to view the comments powered by Disqus.