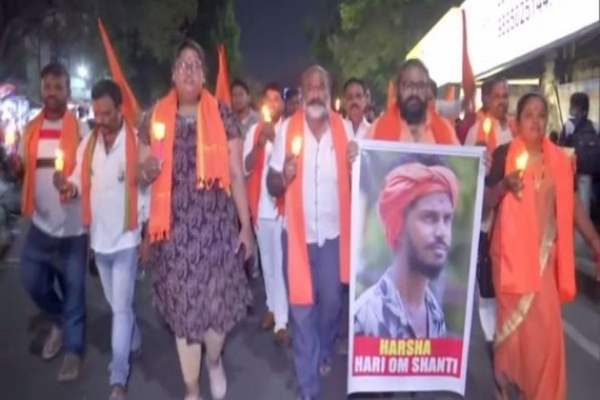 Hyderabad (Telangana) [India], February 23 (ANI): Activists of Vishwa Hindu Parishad (VHP) and Bajrang Dal held a ‘Mashal Rally’ in Hyderabad on Wednesday in the memory of a Bajrang Dal worker who was allegedly murdered in Shivamogga on Sunday.

Calls to ban the Popular Front of India (PFI) and the Students’ Islamic Movement of India (SIMI) were raised during the rally. The rally started from a VHP office in Koti, Hyderabad.

Mahesh Yadav, Bajrang Dal Hyderabad Co-Convenor while talking to ANI said that such incidents are not new to the organization and have been taking place for a while.

Yadireddy, the VHP Organisation State Secretary also said to ANI that many associated with PFI have come to Karnataka from Kerala and demanded that PFI and SIMI be banned.

A 26-year-old Bajrang Dal activist Harsha was allegedly murdered on Sunday night in Shivamogga. Security was tightened in the city following the incident.

A total of six people have been arrested and 12 are being questioned by the state police in connection with Bajrang Dal activist Harsha murder case, said BM Laxmi Prasad, Superintendent of police, Shivamogga on Tuesday.

Meanwhile, the Deputy Commissioner of the district Selvamani R announced that CrPC section 144 has been extended by two more days till Friday morning. (ANI)