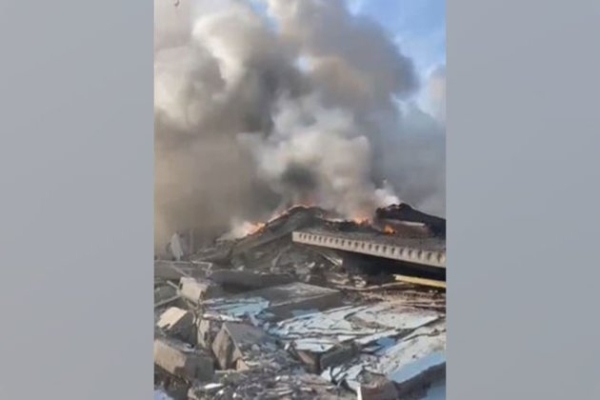 Two distinct fires are seen in central Irpin near a complex of city government and apartment buildings. The images show fires from military strikes and growing flooding from the Irpin River, CNN reported.

The images, taken on Monday, also show Russian artillery positions west of the Russian-held Antonov Air Base northwest of the capital, Kyiv. Two other fires can also be seen in another satellite image among a group of buildings near a school in the city and a residential area near a lake.

An additional satellite image shows growing floodwaters from the Irpin River. It’s unclear how the dam began flooding the Irpin River basin, whether the gates were opened on purpose by the Ukrainians to flood the area, or it was hit by a military strike.

According to CNN, a dam along the Dnieper River was flooding the Irpin River basin and its tributaries. The Irpin River is critical to the Russian advance toward Kyiv; if the Russians cannot cross it, they can’t take Kyiv from the west.

In the early hours of February 24, Russia launched a special military operation in Ukraine after the Donetsk and Luhansk People’s Republics (DPR and LPR) appealed for help in defending themselves against the Kyiv forces. Russia said that the aim of its special operation is to demilitarize and "denazify" Ukraine and that only military infrastructure is being targeted — the civilian population is not in danger. Moscow has repeatedly stressed that it has no plans to occupy Ukraine.According to Russian President Vladimir Putin, the goal is to protect the people of Donbas, "who have been subjected to abuse, genocide by the Kyiv regime for eight years."The head of the Russian National Defense Control Center, Mikhail Mizintsev said on Saturday that there are over 2.7 million people in Ukraine who wish to evacuate to Russia. (ANI)