Ukraine war: why are so many Russian generals being killed? 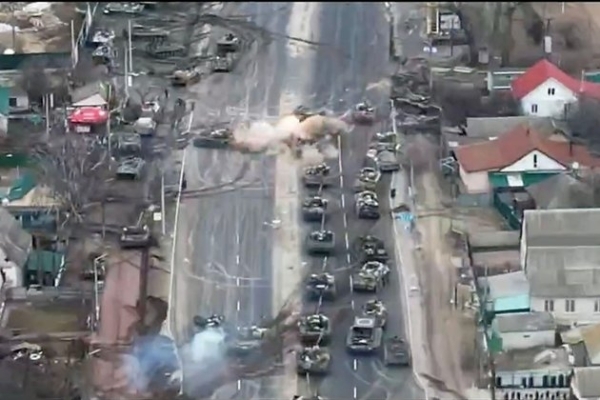 Yet another Russian general, Lieutenant-General Andrei Mordvichev, is reported to have been killed by Ukrainian forces in a conflict that is less than a month old. Mordvichev’s death was announced on Ukraine social media on March 20 2022, but has yet to be confirmed by the Kremlin. His death, if confirmed, will bring the number of Russian generals killed by the Ukrainian armed forces since the war began to five.

The role of an army general is to command and supervise strategy rather than conduct tactical actions on the ground. As a result, casualties at this rank have tended to be low. Comparing this figure of five reported dead in less than a month with the total number of US generals killed between 1965 and 1975 in Vietnam — just 12 — you have to ask why so many Russian generals are dying.

It is very likely that the targeting of Russian senior ground commanders forms part of a wider Ukrainian strategy to disrupt their enemies’ command-and-control network. The Ukrainian forces are aware of the leadership approach that has been adopted by the Russian armed forces since 2001, much of which is based on international analysis conducted by the US and Nato agencies. Its rigid hierarchical system, overseen by an autocratic leader in Vladimir Putin, condemns junior ranks to a chain of perpetual fear, with little allocated for independent thinking or decision-making.

Putin manages the military in much the same way as he does the wider Russian state, choosing loyalty to him above professional competence. This is no more clearly illustrated than the choice of Sergei Shoigu as Russian defence minister in 2012. Lacking any military experience or understanding, Shoigu was chosen as he posed little political threat to Putin or established military tradition. He has been criticised by many for failing to introduce major reforms after the Georgian campaign in 2008, which highlighted key failings in the Russian military in carrying out combat operations.

Corruption in the Russian military

Corruption is endemic within all aspects of Russian life — and this includes the military. A recent report, published as part of the London-based International Government Defence Integrity Index, identified that the Russian military had a corruption risk of high "owing to extremely limited external oversight of the policies, budgets, activities and acquisitions of defence institutions". The report also highlighted a lack of transparency on procurement and the issuing of defence contracts, with a rating of only 36 out of 100 in this category. Loyalty to Putin may have landed senior leaders a place in the inner circle, but this has been at the expense of the personnel they serve.

The public procurement sector often carries with it opportunities for corrupt practices, and this is no different in the Russian state. A report issued by the Risk and Compliance Portal (2021), which examines corrupt practices within states, claims that: "Bribes, kickbacks and other irregular payments are often exchanged to obtain public contracts. Companies report favouritism in decisions of government officials, and public funds are frequently diverted due to corruption."

The report also states that military contracts were more likely to receive approval based not on the quality or standard of the bid, but rather on the company’s personal relationships with state officials and loyalty to the Kremlin.

Military reforms over the past decade have failed to enforce a clear agenda of development and instead have allowed many of their military units to become low grade and poorly trained. A recent [US Defence intelligence assessment](https://crsreports.congress.gov/product/pdf/R/R46616(2021) suggested that Russian forces had sold much of the best equipment during the early months of their deployment to the Ukraine border in 2021, due to poor pay and conditions.

On average, Russian professional soldiers of junior ranks earn US$480 (Pound 360) a month, whereas their equivalents in the Ukrainian army are receiving three times that figure. The division between pay, working conditions and morale could play a big role in determining the outcome of this conflict.

It is true that senior commanders have always been exposed to becoming targets on the battlefield, with the Red Army using this to devastating effect in the ruins of Stalingrad in 1942, in which Soviet snipers targeted both junior and senior ranks. However, what differs between this conflict and those fought in the past is the proximity to the front line in which Russian generals appear to be operating.

The lack of confidence that they have in their lines of communication and the standards of ground commanders — the result of chronic levels of corruption — is providing clear opportunities for the Ukrainian military to strike at the few competent military leaders.

At Stalingrad, the Wehrmacht officer commanding, General Friedrich Paulus, was at least 15 miles away from the city during the battle. This ensured that he and his staff maintained a wider strategic view, placing confidence in his junior ranks rather than exposing himself or his command team to tactical-level decision-making.

Ukraine has several well-equipped combat units who would be capable of carrying out specialist missions, so it would seem that any opportunity might be taken to target the leadership through assassination, designed to disrupt the lines of communication, cause confusion, and slow the Russian advance further.

It is also hugely symbolic and provides a clear example to the Russian rank and file that their enemies can target senior leadership with ease, demonstrating a failure of the system to protect their senior staff. It is a clear symbol of a weak and incompetent communication system that is forcing generals to move from strategic to tactical decision making.

This causes mistrust in the effectiveness of chains of command, with doubt spreading much faster than conviction. Meanwhile, the slower the advance becomes, the more time the Ukrainian command has to prepare their centres of population for the advancing enemy forces.