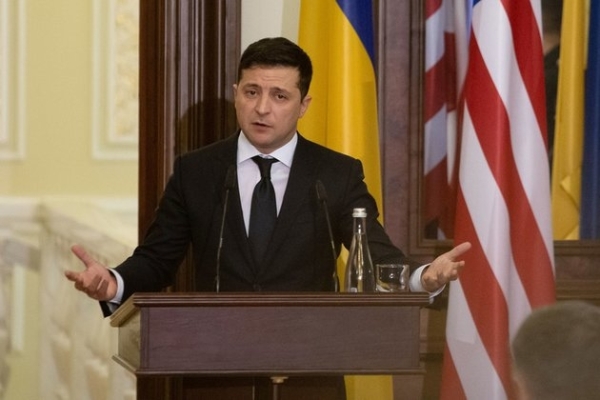 The Ukrainian president took issue with his Russian counterpart’s phrasing

Ukraine is a beautiful country, but it doesn’t belong to Vladimir Putin, Ukrainian President Volodymyr Zelensky has blasted after his Russian counterpart quoted a rhyme used to reprimand children, advising Kiev’s leadership on how to restore peace in the war-torn Donbass.

At a joint press conference with French President Emmanuel Macron on Monday, Putin hit out at Zelensky, saying he refused to abide by the terms of the Minsk agreements — treaties signed in 2014 and 2015 that were meant to resolve the ongoing conflict in eastern Ukraine.

"In Kiev, first they say they will comply, then they say it will destroy their country," the Russian leader complained. "And the president said recently there’s not one item in the Minsk agreements that he likes. ‘Like it or not, my beauty, bear with it.’ They must be fulfilled, it won’t work any other way."

On Tuesday, during his own appearance with Macron, Zelensky noted Putin’s choice of words, a common idiom that rhymes in Russian, which parents and teachers often use with stubborn children.

"’Like it or not, my beauty, bear with it.’ There is, of course, something here that I won’t dispute with the Russian president," Zelensky said with a slight smile. "Ukraine really is a beauty. But as far as the word ‘my’ goes, calling Ukraine ‘my beauty,’ I think that is a bit of an overstatement."

Putin’s admonition previously attracted attention from observers online, some of whom accused the president of making a vulgar sexual threat. Others noted that the words bore a resemblance to the lyrics of a 1990s song by punk group Krasnaya Plesen, or "Red Mold," in which the singer describes a necrophiliac fantasy and says, "Like it or not, my beauty, sleep."

Native Russian speakers, however, quickly pointed out that Putin and Krasnaya Plesen’s phrases are both variations of the same widely used idiom that most likely comes from folklore, in a possible reference to fairy tale character Sleeping Beauty. When asked about the controversy, Kremlin spokesperson Dmitry Peskov replied that he did not think the Russian leader was familiar with the song with which his comment had been associated.