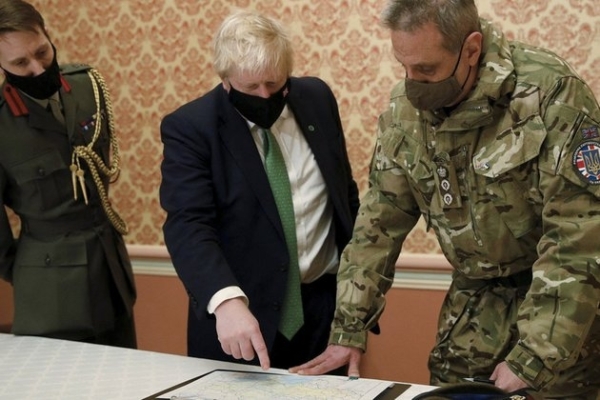 ?Billions of dollars? sent to Kiev from the West could be spent ?more efficiently,? Russia’s ambassador to the United Kingdom told RT

The UK is "obsessed" with Ukraine, which is sucking up vast amounts of British and EU money that could’ve been used for their domestic needs, Russia’s Ambassador to London Andrey Kelin told RT in an interview on Wednesday.

Kelin also unloaded on the US, which he says is now using sanctions and intimidation instead of diplomacy, accusing both Washington and London of being behind the dismal state of relations between Russia and the West.

The ambassador told RT he regrets that London-Moscow relations have deteriorated so much in the wake of the Ukraine crisis. Kelin, however, says he doesn’t see much logic in the British obsession with Kiev.

"I really do not understand why the UK is so much concentrated on Ukraine, on the necessity to support Ukraine. Ukraine is consuming money from France, Britain, the European Union, the World Bank... This is billions and billions of dollars which can be spent with much more efficiency, in these days especially," Kelin noted.

Commenting on the state of relations between Russia and the North Atlantic Treaty Organization (NATO) over Ukraine, the ambassador accused the military bloc of breaking agreements previously reached with Moscow. Specifically, by increasing its military presence in Eastern Europe, NATO is violating the 1997 Founding Act on Mutual Relations, Cooperation and Security, Kelin said. Signed by NATO and Russia in Paris, the document forbids the bloc from stationing nuclear weapons or permanent military forces in its new member states. It also defined the framework for NATO-Russia dialogue, which was brought to a near halt after the 2014 events in Ukraine.

Kelin believes the US and the UK are the chief driving forces behind the increased tensions between the collective West and Russia. Arguing that Washington has apparently "forgotten that there is diplomacy," Kelin said the US now uses "sanctions, pressure, intimidation, ultimatums" as its main weapons. Moscow, however, will not tolerate pressure, the ambassador stressed.

"We of course never will be flexible on sanctions. If they will be imposed, we will return them, we will respond on equal basis," Kelin warned, adding that EU sanctions only contributed to Russia’s increased resilience.

Any attempt to divert public attention from domestic problems to the ‘Russian threat’ are deeply harmful for European security, the ambassador said, suggesting that some countries are using the confrontation for political gain. He believes a dialogue is needed for reaching real, tangible results in relations with Russia.

Over the last few months, the West has repeatedly accused Russia of planning to invade Ukraine, though Moscow categorically denies this claim. Allegations of an imminent attack have also been downplayed by Kiev. In an attempt to de-escalate the tensions, Russia has presented the US and NATO with a number of proposals on security guarantees. The bloc has rejected Moscow’s key proposals, however, including putting an end to NATO’s gradual enlargement eastward.