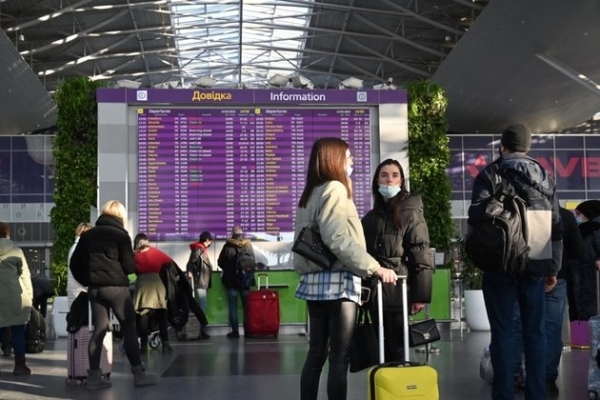 Warsaw — Polish ministers say they are drafting plans with the country’s regional governors to cope with the possible arrival of up to a million refugees from neighboring Ukraine in the event Russia decides to invade — an action U.S. and British officials have warned could come as early as this week.

Mariusz Kamiński, the country’s interior minister, sought to reassure Poles the country is ready for what could be the biggest refugee crisis to roil Europe since 2015, when the influx into the European Union of more than a million refugees and migrants from the Middle East and the sub-Sahara roiled the continent’s politics.

"It is obvious that in connection with the situation in Ukraine we have been preparing for different scenarios," the interior minister said in a posting on Twitter. "One of them includes activities by provincial governors related to the potential influx of refugees from Ukraine, who may be looking for shelter in our country as a result of the potential conflict," he added. 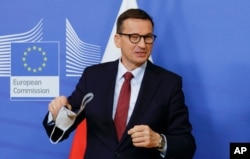 Polish Prime Minister Mateusz Morawiecki has warned Poles that a "military conflict is no longer an unlikely scenario" and, echoing the warnings of officials in Washington and London, said Europe is "on the verge of war." On Sunday, he accused Russia of trying once again to violate Ukraine’s territorial integrity, which he dubbed "an assault on European stability and security" and a "threat to the peace of the entire continent."

U.S. troops of the 82nd Airborne Division recently deployed to Poland because of the Russia-Ukraine tensions are setting up camp at a military airport in Mielec, southeastern Poland, Feb. 12, 2022.

Poland is already home to around one million Ukrainians, who arrived over the years as economic migrants. Poland is not the only central European nation readying for a refugee surge. Latvia has said it is preparing to accept 10,000 Ukrainian refugees, if Russian President Vladimir Putin orders an invasion of Ukraine. 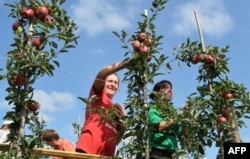 Estonian President Alar Karis is warning that a similar migrant crisis could occur between Estonia and Russia as happened between Poland and Belarus, when migrants were pushed toward the border last year in an apparent attempt to create chaos by Alexander Lukashenko, the Belarusian leader and Putin ally.

The Kremlin denies Western accusations that it is planning to invade Ukraine, despite deploying along Ukrainian borders the biggest ground force amassed since 1945. Russia’s foreign ministry says Western media are colluding in a smear campaign against Moscow with the goal of "discrediting Russia’s fair demands on security guarantees and justifying the West’s geopolitical aspirations and militarization of the territory of Ukraine." 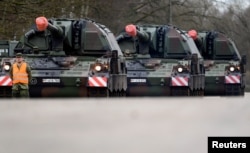 A soldier stands in front of Howitzers of the German armed forces Bundeswehr before they are loaded onto trucks to Lithuania at the Bundeswehr military base in Munster, Germany, Feb. 14, 2022.

Russia has demanded Ukraine never join NATO. And the Kremlin wants any NATO military presence removed from the former Communist countries of central Europe, once members of the Soviet Union’s Warsaw Pact and now participants in the Western alliance.

"There are 130,000 Russian troops on the border with Ukraine; thousands more in amphibious vehicles on the Black Sea and the Azov Sea," Britain’s armed forces minister, James Heappey, said Monday. "If all of this were for show, to win leverage in diplomacy, that doesn’t need the logistics, the fuel, the medical supplies, the bridging assets, the unglamorous stuff that makes an invasion force credible but doesn’t attract headlines. All of that is now in place too," he added.

According to reports, some wealthy Ukrainians are not waiting to see whether a Russian offensive is launched. Ukrainska Pravda, a Kyiv-based newspaper, reported there has been an increase in private executive jets leaving Ukraine.

The paper said more than 20 private jets flew out of Kyiv on February 13 and over the last two weeks aircraft owned by some of the country’s richest oligarchs and businessmen, including Rinat Akhmetov, Victor Pinchuk, Borys Kolesnikov and Vadym Stolar, left the country, with many carrying family members and business associates and most heading to Vienna.

While the wealthy apparently are departing, the Ukrainian government is scrambling to ensure commercial carriers continue to fly in and out of Ukraine. Last week, Dutch airline KLM announced it was suspending Ukraine operations because of safety concerns. And the flights of Ukrainian budget airline SkyUp have been disrupted because a leasing company is demanding the return of its aircraft.

Other airlines, including German carrier Lufthansa, are weighing their options, partly because their insurers are becoming jittery. Ukraine’s transport ministry said Sunday that Ukrainian skies remain open. "Information about the closure of Ukraine’s airspace is not true. Closure of airspace is a sovereign right of Ukraine; no decision has been made," it said in a statement.

The ministry announced a $590 million fund to be used for "guaranteeing the safety of flights through Ukraine for insurance companies, reinsurers, leasing companies and airlines." The move came amid reports that British reinsurance giant Lloyd’s of London is considering suspending war insurance provisions for carriers flying into or over Ukraine.

As the transport ministry made its announcement, Ukrainian President Volodymyr Zelenskiy downplayed reports of an imminent invasion, and complained of media reports stoking panic. 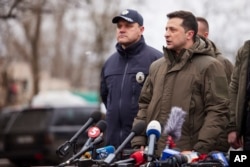 Zelenskiy and other Ukrainian leaders have been trying to talk down the prospects of an all-out war because of the damaging effect it is having on the country’s economy and are worried about the impact on public morale.

While trying to calm fears, his government has called formally for a meeting with Russia and other members of a European security group over the military buildup. Ukrainian Foreign Minister Dmytro Kuleba said Russia has so far ignored requests to explain the deployment. Ukraine made a request for an explanation via the Organization for Security and Cooperation in Europe, or OSCE. Russia "must fulfill its commitment to military transparency in order to de-escalate tensions and enhance security for all," Kuleba said.

On Sunday, President Zelenskiy spoke for nearly an hour by phone with U.S. President Joe Biden. The White House said President Biden reiterated U.S. support for Ukraine, and that both leaders had agreed on "the importance of continuing to pursue diplomacy and deterrence.’

In the latest attempt to find a diplomatic solution, German Chancellor Olaf Scholz was scheduled to hold meetings with President Zelenskiy in Kyiv later Monday, and with President Putin in Moscow on Tuesday. The chancellor has warned of severe economic consequences for Russia should it launch any invasion, echoing statements by other Western leaders.