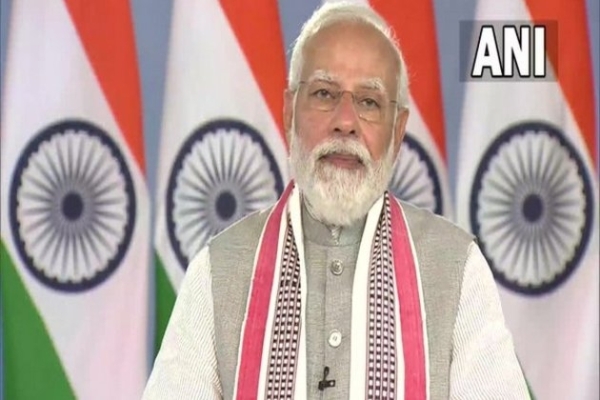 New Delhi [India], February 19 (ANI): Prime Minister Narendra Modi on Friday said that the government will draft policies to ensure that no hindrance comes in the path of the emerging new drone market in the country.

The Prime minister flagged off 100 Kisan drones in different cities and towns of India to spray pesticides in farms across India. He virtually addressed to a group of farmers gathered at Manesar from where the "Drone Kisan Yatra" was flagged off.

"This occasion is the best example of how far the country can fly if policies are drafted with the right spirit," he said while adding, "Till recently, there was a conception that drones were meant for armed forces and fighting enemies. However, the Kisan Drone Suvidha has added a new chapter in the direction of modern agricultural facilities of the 21st century."He further said that this beginning will not only prove to be a milestone in the development of the drone sector but also will also open the sky to unlimited possibilities.

"Many companies in the country are moving fast in this direction. A new ecosystem of the drone market is developing in India. More than 200 drone startups are currently working in the country and soon their numbers will increase to 1000 which will create huge job opportunities. India is poised to witness the emergence of new leadership in the drone sector and I assure you that the government will draft policies to ensure no obstructions come in the path of the entrepreneurs," PM Modi said.

The Prime Minister said that the development of the drone market in India will generate fresh employment and new opportunities for the youth.

"I have been told that Garuda Aerospace has set a target of manufacturing 1 lakh Made-in-India drones in the next 2 years. This will generate fresh employment and new opportunities for the youth," he said.

"The reforms that have taken place in the country in the last few years have given strength to the youth and private sector. India has not lost its time in apprehensions. We relied on youth thinking and went ahead," he added.

PM Modi said that in this year’s Budget, the country has openly given priority to technology and innovation.

"Recently, 100 drones were at display during the beating retreat ceremony. Under the Swamitva scheme, land records are being documented through drone technology, medicines, vaccines are being supplied to various parts of the country and it is also being used for sprinkling pesticides etc on crops," the Prime Minister said.

He said the Kisan Drone will usher in a new edge revolution as high capacity drones will be used to carry vegetables, fruits, fishes to the market directly from the farms. "These items will be supplied directly to the market with minimal damage, consuming lesser time, resulting in more profits to farmers and fishermen," the prime minister said.

During the Budget 2022-23 announcement, Finance Minister Nirmala Sitharaman announced a major stimulus for the agriculture and farming sector.

Giving details, Sitharaman said the Centre will promote Kisan Drones, chemical-free natural farming, public-private partnerships for the delivery of digital and high-tech services to farmers across the country during the financial year 2022-23Emphasizing the usage of technology, she said Kisan Drones will be promoted for crop assessment, digitization of land records and spraying of insecticides and nutrients. (ANI)