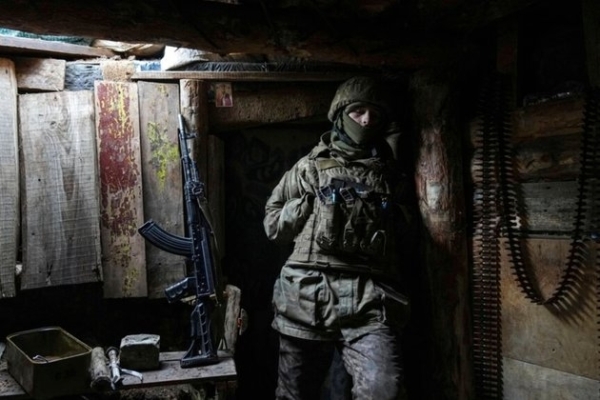 Ukrainian President Volodymyr Zelenskyy said Saturday that he wants to meet with Russian President Vladimir Putin to negotiate a solution to the crisis that has seen thousands of Russian military troops deployed along Ukraine’s borders.

"I don’t know what the president of the Russian Federation wants, so I am proposing a meeting," Zelenskyy said at the Munich Security Conference.

Meanwhile, Austria, France and Germany are the latest nations to urge their citizens to leave Ukraine, in anticipation of an imminent Russian invasion. Lufthansa, the German airline, has also canceled flights to Kyiv and Odessa, a Ukrainian Black Sea port.

U.S. President Joe Biden will meet with the National Security Council on Sunday, the White House announced Saturday as it reaffirmed that "Russia could launch an attack against Ukraine at any time," White House press secretary Jen Psaki said.

Observers from the Organization for Security and Cooperation in Europe reported more than 1,500 cease-fire violations in east Ukraine on Saturday, the highest single-day number this year.

Russia’s defense ministry said Saturday’s exercises, which the Kremlin says were previously planned to check readiness, involved practice submarine launches of intercontinental ballistic missiles, with Putin and the president of Belarus looking on.

Saturday, U.S. Defense Secretary Lloyd Austin said the more than 150,000 Russian troops that have massed at Ukraine’s border "are now poised to strike," as he spoke with reporters in Lithuania, where Lithuanian President Gitanas Nauseda called for an increased U.S. troop presence.

At the Munich Security Conference, Harris warned that Russia’s plan was already unfolding.

"There is a playbook of Russian aggression, and this playbook is too familiar to us all. Russia will plead ignorance and innocence. It will create false pretext for invasion, and it will amass troops and fire power in plain sight," said Harris, who added a Russian invasion would trigger sanctions that include far-reaching financial sanctions and export controls.

She also said the U.S. would bolster NATO’s eastern flank as another deterrent to a Russian military invasion.

Speaking at the conference earlier Saturday, Stoltenberg said Russia, in threatening Ukraine, "will get more NATO" instead of the smaller NATO footprint Putin says he is seeking.

Stoltenberg also said he has sent a letter to Russian Foreign Minister Sergey Lavrov calling for a meeting of the NATO-Russia Council to avert a conflict in Ukraine. Stoltenberg told the Munich Security Conference that there is no evidence that Russia has withdrawn any of its troops from Ukraine’s borders and there is a real risk of conflict.

’We are extremely concerned because we see that they continue to build up, they continue to prepare. And we have never in Europe seen since the end of the Cold War, such a large concentration of combat-ready troops,’ Stoltenberg said.

Ukraine’s Zelenskyy met on the sidelines with Harris, as he sought to rally more military and financial support from Western allies.

As he addressed the audience of high-level officials and security experts from around the world, Zelenskyy pushed back against U.S. predictions of an imminent Russian invasion, declaring "We do not think we need to panic," Agence France-Presse reported.

British Prime Minister Boris Johnson, however, told the BBC that evidence points to Russia planning ‘the biggest war in Europe since 1945."

Ukraine’s military accused separatists in two breakaway territories in eastern Ukraine — the self-proclaimed Donetsk and Luhansk republics — of carrying out a new wave of attacks Saturday.

The separatists, who also accused Ukraine’s military of carrying out new attacks Saturday, signed mass military mobilization decrees. The head of one of the territories urged all able-bodied men to take up arms against what he claimed is Kyiv’s aggression. The regions have also begun evacuating some civilians from border areas.

Biden said the move was a result of Russian misinformation, saying that it "defies basic logic" that people in Ukraine would "choose this moment" to engage in combat with more than 150,000 Russian troops on Ukraine’s borders.

Ukraine’s military said two of its soldiers were killed Saturday in shelling from pro-Russian separatists in eastern Ukraine, according to AFP, after initially reporting one fatality.

Should Moscow invade Ukraine, it will be critical for the United States to convince the world that Russia is the aggressor and that it did so unprovoked, Max Bergmann, senior fellow at the Center for American Progress, told VOA.

However, Biden is still offering Putin a de-escalation off-ramp, saying that diplomacy is "always a possibility." He said, based on the "significant intelligence capability" of the U.S., he has reason to believe Putin will still consider the diplomatic option.

U.S. Secretary of State Antony Blinken is scheduled to meet in person with Lavrov, Russia’s foreign minister, on Feb. 24.

In the event of an invasion, Western allies must resolve differences over the timing and severity of sanctions against Moscow. For example, the initial package likely will not include banning Russia from the Society for Worldwide Interbank Financial Telecommunication, or SWIFT, system used by 200 countries for international financial transfers.

"We have other severe measures we can take that our allies and partners are ready to take in lockstep with us, and that don’t have the same spillover effects," said Daleep Singh, the deputy national security adviser for international economics, who spoke to reporters during Friday’s White House briefing. "But we always will monitor these options and we’ll revise our judgments as time goes on."

Singh said U.S. measures are not designed to reduce Russia’s ability to supply energy to the world but that it would be "a strategic mistake" for Putin to retaliate against Western sanctions by cutting back energy supplies to Europe.

"Two-thirds of Russia’s exports and half of its budget revenues come from oil and gas, and if Putin were to weaponize his energy supply, it will only accelerate the diversification of the world away from Russian energy consumption," he said.

Singh added Moscow would be unable to replace technology imports from other countries, including China, if Washington also were to impose tough export controls that it has threatened.

Russian officials have denied they plan to invade Ukraine, but diplomatic talks with Western officials have led to a standoff. Russia has demanded that the U.S. and its allies reject Ukraine’s bid for membership in NATO.

Some information in this report came from The Associated Press, Reuters and Agence France-Presse.