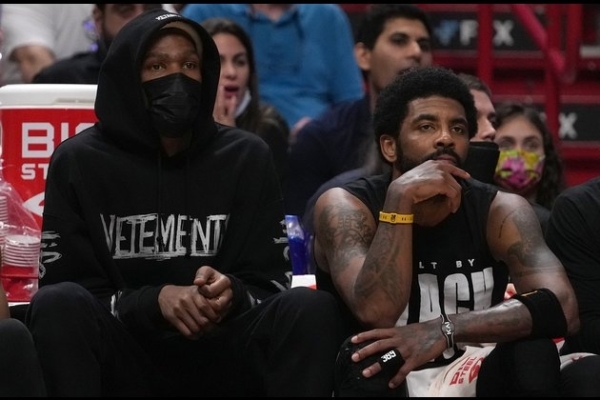 Kyrie Irving could soon be available for home games in Brooklyn.

New York City mayor Eric Adams said he’s eager to end the COVID-19 vaccine mandate, which would clear the way for the Nets to use their All-Star point guard in games at the Barclays Center. Irving has played in road games with the Nets but refused the COVID vaccine required for players in the New York home market.

Major cities are repealing mask and vaccine mandates with Philadelphia, Boston and soon Chicago among them.

"I take my hat off to New Yorkers through masks, vaccines, through social distancing. We were hit with the uncertainty, the fear of COVID. I’m very proud of how we responded," Adams said Wednesday without providing a timeline or estimate of when the rules could change in New York. "Every morning I meet with my health professionals because I always say I’m going to follow the science. I’m not going to get ahead of the science because I’m ready to get ahead of all of this and get back to a level of normalcy. But they’re giving us clear instructions. They gave us benchmarks, we’re going to follow those benchmarks. But I look forward to the next weeks going through a real transformation where I don’t have to wonder what you look like. We’re moving in the right direction. We’re going to do it in a safe way."

Irving was approved to return and play in road games by the Nets on December 17. In 14 games this season, he’s averaging 24.1 points and 5.4 assists per game.

The Nets have 23 games remaining on their regular-season schedule, but 15 of them would be played without Irving due to the vaccine mandate.

Irving has recently curried support from NBA commissioner Adam Silver and some league owners who criticized the mandate applying to players from the New York market but not to players visiting New York from other cities.