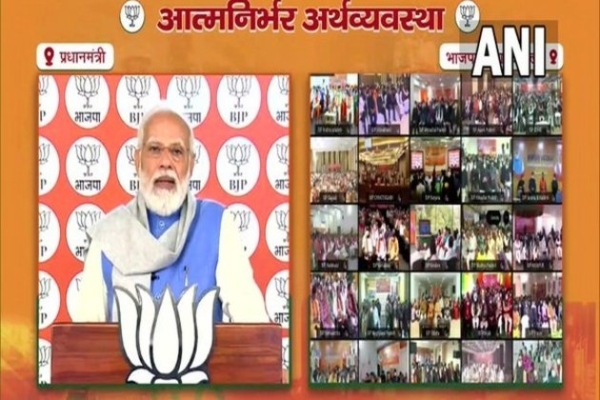 New Delhi [India], February 2 (ANI): Prime Minister Narendra Modi on Wednesday said the digital Rupee will open up new opportunities for the Fintech sector and will give a big boost to the digital economy.

"There is also a lot of discussion about Central Bank Digital Currency in today’s newspapers. This will give a big boost to the digital economy. This digital rupee, which is our physical currency now, will have a digital form and it will be controlled by RBI. It can be exchanged with physical currency. Digital Rupee will open up new opportunities for the Fintech sector," said PM Modi while addressing BJP workers and leaders on Budget 2022.

The Prime Minister said that people who have Sukanya Samriddhi accounts and PPF accounts in the post office will be able to transfer instalments online directly from their bank account.

"Those who have Sukanya Samriddhi account and PPF account in the post office, also do not need to go to the post office to deposit their instalments. Now they will be able to transfer online directly from their bank account," he said.

He further added that the online fund transfer facility will be available in post office accounts like banks.

"Now mobile banking, internet banking, ATM and online fund transfer facility will be available in post office accounts like banks. At present, there are more than 1.5 lakh post offices in the country, most of which are in villages," he added.

The Prime Minister said that very soon optical fiber connectivity will be completed to all the villages.

"Today cheap and fast internet has become the identity of India. Very soon optical fiber connectivity will be completed to all the villages. 5G service is going to give a different dimension to ease of living and ease of doing business in India," he said.

Sitharaman announced in her budget speech that income from digital asset transfers will be taxed at a rate of 30 per cent.

The Finance Minister also announced that the Reserve Bank of India will issue a Digital Rupee in the next financial year.

In order to regulate the digital assets market, the government had proposed to introduce the Cryptocurrency and Regulation of Official Digital Currency Bill, 2021 in the Winter Session of Parliament. However, the Bill was not tabled with the government deciding to have more consultations.

Sitharaman said Central Bank Digital Currency (CBDC) will give a big boost to the digital economy.

The minister said the digital currency will also lead to a more efficient and cheaper currency management system and it will use blockchain and other technologies. (ANI)