Watch The Conversation’s live-streamed events from 2021 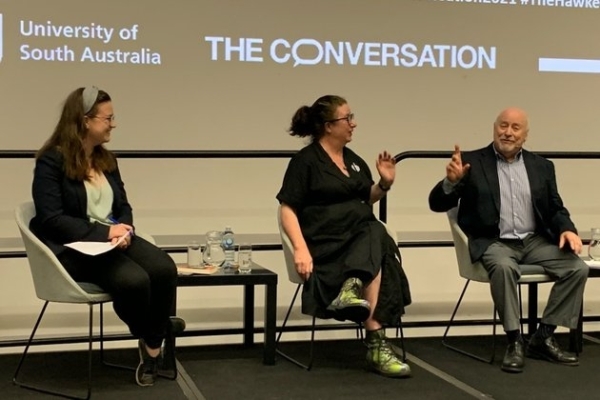 2021 was yet another tumultuous year in news. The pandemic once again plunged Australia’s east coast into rolling lockdowns, the vaccine rollout recovered from a slow start, sexual misconduct and integrity issues put the Morrison government on the back foot... and billionaires shot themselves into space.

The Conversation explored these issues and many more in a series of panel discussions featuring academic experts.

Catch up on selected events below with these digital recordings.

The year in #auspol with Michelle Grattan and Peter Martin

To celebrate the launch of The Conversation’s tenth anniversary essay collection No you’re not entitled to your opinion, and 49 other essays that got the world talking, The Conversation’s Chief Political Correspondent Michelle Grattan and Business + Economy Editor Peter Martin joined Dr Caroline Fisher from The University of Canberra to discuss the year that was, and took an expert punt at what lies ahead in 2022.

How did we end up here?

Held in partnership with the University of South Australia’s Hawke Centre, this Adelaide-based panel event covered everything from epidemiology to space archaeology.

No, you’re not entitled to your opinion

Read more: Plants and people: the art of living together, a live-streamed event

What is the future of First Nations literature?

This continent has the oldest continuous storytelling tradition in the world. But the Australian literary canon is, let’s face it, overwhelmingly white. And while First Nations literature is increasingly visible in bookshops and literary awards, are things really changing?

Held in partnership with the State Library of Queensland, this Brisbane-based panel event featured special guests: