RAQQA, Syria — In a square that a few years ago was a grim stage for the Islamic State group’s brutal rule in the Syrian city of Raqqa, Mahmoud Dander sat deep in thought.

He wants to leave Syria, but has a problem: The 75-year-old has no money. He recalled the old days before protests and wars led to his country’s collapse and national currency crash: Syria wasn’t thriving back then, but he had work, his children had university degrees and decent futures, and food was always on the table.

That’s all gone now. ‘We have fallen, just like our currency,’ he said.

Raqqa, the former de facto capital of the self-proclaimed IS caliphate and home to about 300,000 people, is now free, but many of its residents try to leave. Those with property are trying to sell it to save up for the journey to Turkey. Those without money struggle to get by.

FILE — A fighter of the Christian Syriac militia that battles Islamic State group militants under the banner of the US-backed Syrian Democratic Forces, burns an IS flag on the front line on the western side of Raqqa, July 17, 2017.

At least 3,000 people left Raqqa for Turkey in 2021, according to the city’s civil council co-chair Mohammed Nour.

Their reasons span the spectrum of post-war life in Syria, one of the world’s most complex conflict zones. They include economic collapse and widespread unemployment following one of the worst years of drought, as well as fears of an IS comeback and a proliferation of criminal gangs. And there is the looming specter of conflict between rival powers that control various parts of northern Syria, including Turkey, Russia and Syrian government forces.

On the surface, the city’s slow recovery from IS rule is evident. Cafes and restaurant are full of patrons. Kurdish-led forces stand guard at every major intersection.

But poverty is rampant in the majority Arab city administered by U.S.-backed Kurdish-led forces. People line up for basics such as bread. Unemployed young men sit around. Water and electricity are limited. Many live among bombed-out ruins. Local officials say at least 30% of the city remains destroyed.

Poverty and unemployment drive young men into the arms of IS. Kurdish investigators say new IS recruits captured last month had been lured by money. At the same time, the Kurdish-led city administration received applications from 27,000 job seekers last year, but had no jobs.

Milhem Daher, a 35-year-old engineer, is in the process of selling his home, businesses and properties to pay a smuggler to take him and his family of eight to Turkey, a key route for Syrian migrants trying to win asylum in Europe.

He plans to leave as soon as he has enough money.

FILE — Milhem Daher, 35, drinks tea as he sits with his family outside his house in the village of Kasrat Srour, in the southeastern countryside of the Raqqa province, Syria, Feb. 7, 2022.

Daher had survived Raqqa’s recent violent history, including the outbreak of Syria’s civil war in 2011, and the 2014 takeover by IS militants who turned the city into the capital of their caliphate spanning parts of Syria and Iraq. A U.S.-led coalition dropped thousands of bombs on the once vibrant city to drive out IS, liberating it in 2017. IS lost its last territorial foothold in Syria in 2019.

Daher emerged from the dark chapter ready to invest, but said he faced many obstacles, including a lack of resources and export markets. ‘If you sell to locals, it won’t generate profit,’ he said.

For his first project, Daher bought seeds to cultivate vegetables. When it was time to harvest, traders weren’t interested in paying the asking price.

He purchased trucks to lift rubble amid reconstruction efforts. But the quality of the vehicles quickly degraded as a result of poor fuel in the market and lack of materials for upkeep. A potato chip factory and internet service company also floundered.

FILE — Milhem Daher checks his cows outside his house in the village of Kasrat Srour, in the southeastern countryside of the Raqqa province, Syria, Feb. 7, 2022.

Now he is selling off what remains of these failed businesses to start a new life. He needs $10,000.

In Raqqa, having money can also be a problem as kidnappings-for-ransom are on the rise.

Real estate developer Imam al-Hasan, 37, was taken from his home and held for days by attackers in military fatigues. To secure his release, he paid $400,000, money belonging to him and traders who trusted him with their life savings. He complained to the local authorities, but he said nothing was done. A month after the ordeal, bruises are still visible on his face and legs.

Al-Hasan, too, is selling his home and belongings. ‘There is nothing left for me here,’ he said.

Two of Al-Hasan’s relatives who left in September and recently arrived in Europe said that apart from economic uncertainty it was the threat of more violence that pushed them to leave.

’At any moment the situation could explode, how can I stay there?’ said Ibrahim, 27. He and Mohammed, 41, spoke under the condition that only their first names be used, citing security concerns for their wives and children still living in the city.

Like many others, their journey from northeastern Syria to Europe began via tunnels along the town of Ras al-Ain, which straddles the border with Turkey. 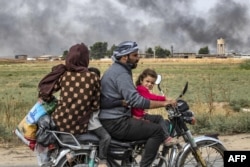 FILE — Members of a Syrian family use a motorcycle to flee the countryside of the northeastern Syrian town of Ras al-Ain on the Turkish border, toward the west to the town of Tal Tamr, Oct. 19, 2019.

The smuggler had charged $2,000 per person. From there, the path to Europe was riddled with risk.

Ibrahim arrived in Germany last week after an arduous journey that began in Belarus. Mohammed walked for treacherous miles before setting off for Greece by boat. He ended up in The Netherlands in October.

Mohammed is waiting for a chance to bring his family from Raqqa to Europe, he said in a phone interview. For now, he is without work.

Back in Raqqa, Reem al-Ani, 70, prepares tea for two. Her son is the only one of four children who has remained in Syria. The others are spread across the world.

The stairs leading to their apartment are riddled with bullet holes, remnants of battles to dislodge IS. The ceilings are charred from smoke.

She has grown accustomed to a silent house. ‘I miss them,’ she said of her children.

Nearby, in Naim Square, the elderly Dander says he barely makes ends meet, surviving on his rapidly diminishing pension from his previous government job.

His three children have university degrees in engineering and literature, and one was a teacher, he said. But none have been able to find work. He wishes he had the money to help them leave.

’I spend every day thinking about how to get out,’ he said.