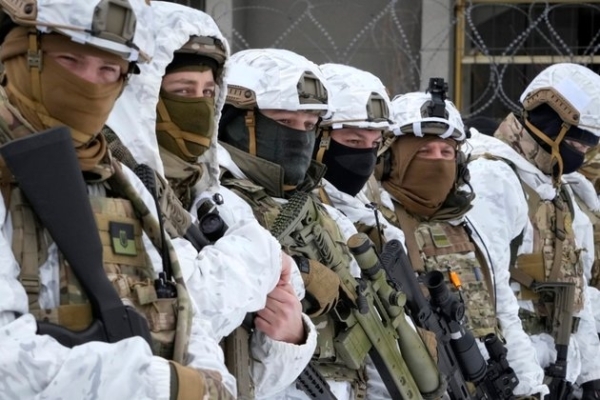 Editor’s note: Here is a fast take on what the international community has been up to this past week, as seen from the United Nations perch.

Ukraine’s U.N. ambassador in Geneva said Friday that her country will not bow to threats of military action from Russia and is prepared to fight to protect its sovereignty and territorial integrity.

Hunger spreading in Horn of Africa

UNICEF warned Wednesday that the Horn of Africa is facing a climate-induced emergency. As many as 20 million people in Eritrea, Ethiopia, Kenya and Somalia could need water and food assistance in the next six months due to severe recurring drought.

Coups on the rise in Africa

Military coups have been on the rise in Africa over the last year-and-a-half, prompting U.N. Secretary-General Antonio Guterres to declare that there is an ‘epidemic’ of them. Burkina Faso is the latest, and Guinea-Bissau averted one on February 2. VOA takes a deeper look at the factors fueling these power grabs.

By the Numbers: Coups in Africa

- Secretary-General Antonio Guterres attended the opening ceremony of the Beijing Winter Olympics. On the sidelines, he met with Chinese President Xi Jinping and Foreign Minister Wang Yi. According to a readout, they discussed the COVID-19 pandemic, climate change and world conflicts. The secretary-general also told the Chinese officials that he expects them to allow for a ‘credible visit’ of his High Commissioner for Human Rights, Michelle Bachelet, to China, including to Xinjiang, the province where the country’s oppressed Uyghur Muslim minority lives. China has been promising such a visit for several years, and recently said it is fine as long as Bachelet comes to have an exchange, not an investigation. Beijing denies it violates the rights of Uyghurs and says it is combating terrorism.

- Deputy Secretary-General Amina Mohammed traveled to Addis Ababa for the African Union Summit last weekend. She then visited conflict zones in northern Ethiopia, going to Tigray where she met with the regional president, and to the neighboring provinces of Afar and Amhara, where fighting and its consequences have spilled over, as well as to the Somali region. The U.N. has been seeking a halt to the fighting in the north and expanded access for humanitarian workers.

- Tropical Cyclone Batsirai made landfall on the east coast of Madagascar on Saturday night, local time. The intense storm killed at least 21 people, including several children, and displaced more than 62,000 people. The U.N. said this week that it is working with its humanitarian partners and coordinating with the government. Surge teams have been deployed and a humanitarian air bridge set up. By Friday, the WFP had distributed 10,000 hot meals at shelters and distributed other food aid to displaced persons.

- UNESCO expressed concern on Thursday about journalists working in Myanmar. The U.N.’s cultural organization said that in the past year since the military seized power, at least 146 journalists have been arrested, while some 52 journalists, including 12 women, remain under detention. At least three reporters are known to have died in detention.

After a year-long absence, the iconic tapestry of Pablo Picasso’s anti-war masterpiece ‘Guernica,’ was returned to its place of honor outside the U.N. Security Council on Saturday.

Iconic Tapestry of Picasso’s ‘Guernica’ Back at UN

’What we’re appealing for as humanitarian organizations on the ground, is that this military, political strategic chess game, involving Moscow and Minsk and Brussels and Washington and other capitals, that it is concentrating on helping people survive on the ground, protecting them, and avoiding a senseless conflict. Everybody would lose from the conflict, but first and foremost the two million people who live within 20 kilometers from the frontline.’

- Jan Egeland, secretary-general of the Norwegian Refugee Council, telling VOA in an interview on Monday about his visit last week to eastern Ukraine.

What we are watching next week

On February 17, the U.N. Security Council will hold its annual meeting on the implementation of the Minsk agreements, which lay out the path to a political settlement in eastern Ukraine between Kyiv and Russian-backed separatists. In February 2015, the Security Council endorsed Minsk II in a resolution. This year’s discussion takes place against the backdrop of the threat of a Russian invasion of Ukraine.

The U.N. corridors and grounds are full of art, sculptures and unique objects donated by governments, foundations and individual donors, many of which can be seen on public tours of the complex. The Guernica tapestry, mentioned above, is a gift of the American Rockefeller family. (They also donated the land the U.N. complex is built on in New York.) There is also a section of the Berlin Wall on the compound’s north lawn and a fountain paid for by U.S. schoolchildren at the southern entrance to the complex. Among the objects on display in the corridors is a model of the ornate Royal Thai Barge ‘Suphannahong’ carved from teak wood, and a black pot from 300 B.C. from Sudan. On the first floor, there is a painting of a white dove of peace by Macedonian painter Vasko Taskovski.