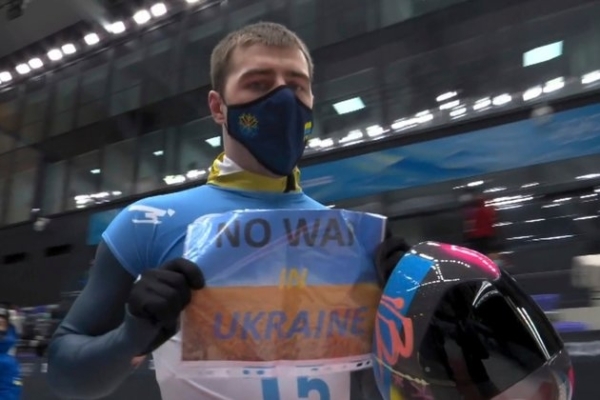 Sullivan, speaking at a White House briefing Friday said Russia now has enough forces on Ukraine’s border to conduct a major military operation. He said any attack could see Russia seizing "significant territory" in Ukraine, including the capital, Kyiv.

Sullivan urged Americans in Ukraine to leave in the next 24-48 hours, saying a Russian invasion could begin with an air assault that would make departures difficult.

’The risk is high enough and the threat is now immediate enough that prudence demands that it is the time to leave now," Sullivan said.

President Joe Biden walks on the South Lawn of the White House after stepping off Marine One, Feb. 10, 2022, in Washington.

The White House said ahead of the call that Biden would be talking to the leaders of Canada, France, Germany, Italy, Poland, Romania, Britain, NATO, the European Union and the European Council to discuss "shared concerns about Russia’s continued buildup of military forces around Ukraine and continued coordination on both diplomacy and deterrence."

Earlier Friday, U.S. Secretary of State Antony Blinken warned of a possible Russian attack on Ukraine at "any time" and urged U.S. citizens to leave the eastern European country immediately.

Blinken warned of an imminent Russian attack on Ukraine after meeting in Australia with leaders of the so-called Quad countries — the United States, Australia, Japan and India.

Blinken’s warning also came one day after Biden urged Americans to leave the country immediately and warned in an interview with NBC News of a potential major conflict with Russia should a clash erupt between U.S. and Russian troops.

At a joint news conference in Canberra after meeting with the Quad ministers, Blinken said, "We continue to see very troubling signs of Russian escalation, including new forces arriving at the Ukrainian border. And as we’ve said before, we’re in a window when an invasion could begin at any time. And to be clear, that includes during the Olympics."

"We’re continuing to draw down our embassy," Blinken added. "We will continue that process. And we’ve also been very clear that any American citizens who remain in Ukraine should leave now."

On Thursday, Biden said, ‘We’re dealing with one of the largest armies in the world. This is a very different situation, and things could go crazy quickly.’

The U.S. president said he would not send troops to Ukraine, even to rescue Americans in case of a Russian invasion.

’That’s a world war. When Americans and Russians start shooting one another, we’re in a very different world,’ he said.

Servicemen of the armed forces of Russia and Belarus take part in the Union Courage 2022 joint military exercise at the Brestsky training ground in Brest Region, Belarus, in this still image taken from video released Feb. 11, 2022.

Russia opened 10 days of massive military drills in Belarus on Thursday and docked six of its ships at a strategic Black Sea port, drawing a sharp rebuke from Ukrainian officials, who characterized Moscow’s actions as further escalating tensions in the region.

The Russian maneuvers in Belarus involved thousands of troops and sophisticated weapons systems, such as S-400 surface-to-air missiles, Pantsir air defense systems and Su-35 fighter jets, with some of the training just 210 kilometers north of the Ukrainian capital, Kyiv.

The Russian Defense Ministry said the six ships arrived at the port of Sevastopol in Crimea, which Moscow annexed from Ukraine in 2014. They had been on a 13,000-kilometer journey from the Baltic Sea to begin what officials described as naval exercises. The Russian landing ships are designed for unloading troops, vehicles and material onto land.

Officials in Moscow and Minsk have said Russian troops will withdraw from Belarus sometime after the drills end February 20. But Western officials remain fearful they could be deployed in a Russian invasion of Ukraine, a onetime Soviet republic, along with 100,000 troops Moscow has amassed along Ukraine’s eastern flank.

Ukrainian officials, who launched their own drills on Thursday, assailed the impending naval drills, characterizing them as ‘destructive activity to destabilize the security situation.’ Kyiv accused Russia of violating international law by restricting wide swaths of open waters to conduct missile and artillery fire training.

Russian officials have denied they plan to invade Ukraine, but diplomatic talks with Western officials have led to a standoff. Russia has demanded that the United States and its allies reject Ukraine’s bid for membership in NATO.

The West has rejected that as a non-starter but has said it is willing to negotiate with Moscow over missile deployment and troop exercises in eastern European countries closest to Russia.

A day of talks between Ukraine and Russia ended Thursday without progress. These talks are an attempt to end the eight-year conflict between Ukraine forces and pro-Russian separatists in the Donetsk and Luhansk regions.

The failure to reconcile each side’s interpretations of the Minsk accords, a 2015 agreement that attempted to end fighting in eastern Ukraine, was seen as a setback to defusing the wider crisis.

Western governments have been calling on Russia to take steps to de-escalate the crisis and vowed to impose swift and severe economic sanctions if Russia were to invade Ukraine.

Some information for this report came from The Associated Press, Agence France-Presse, and Reuters.