Biden Agrees to Talks with Putin, If Russia Does Not Invade Ukraine 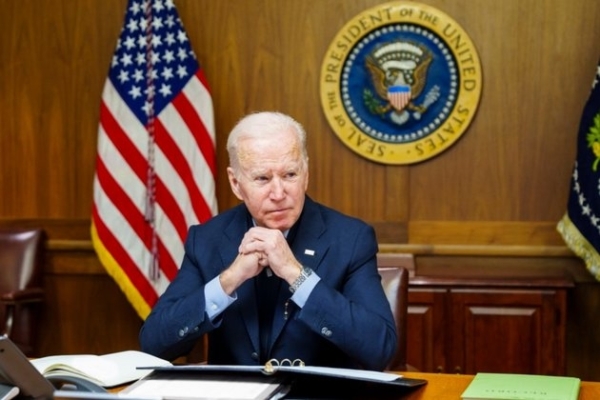 U.S. President Joe Biden has accepted a meeting with Russian President Vladimir Putin, "in principle," and only if Russia "does not proceed with military action," the White House announced late Sunday.

The diplomatic engagements come as the United States warns of the potential for a Russian invasion of Ukraine, with officials making clear that the U.S. and its Western allies are prepared to impose punishing sanctions while still prioritizing a peaceful resolution to the crisis that has built for months.

"We are always ready for diplomacy," Psaki said. "We are also ready to impose swift and severe consequences should Russia instead choose war. And currently, Russia appears to be continuing preparations for a full-scale assault on Ukraine very soon."

Biden discussed the situation in a phone call Sunday with French President Emmanuel Macron, and during a meeting of his National Security Council.

Ukrainian President Volodymyr Zelenskyy said he also spoke with Macron about the situation in eastern Ukraine where in recent days there has been sustained shelling between Russian separatists and Ukrainian forces. Zelenskyy tweeted a call for a "regime of silence" and said he supports convening talks with the Trilateral Contact Group that includes Russia, Ukraine and the Organization for Security and Cooperation in Europe.

Despite Russian leaders denying any plans to invade Ukraine, fears that Putin in set to order such a move have increased in recent weeks as Russia massed more troops and equipment along the border with Ukraine, and the announcement that military drills in Belarus, Ukraine’s northern neighbor, would not end Sunday as planned.

Blinken told CNN’s "State of the Union" show Sunday that the Russian deployments, cyber attacks on the Ukrainian defense ministry and major banks last week and the new outbreak of fighting in eastern Ukraine signal that Russia is "following its playbook" ahead of large-scale warfare.

"Everything leading up to the invasion is already taking place," Blinken said.

The separatists in eastern Ukraine have claimed that Kyiv’s forces are planning an attack there, which Ukraine denies.

At the Munich Security Conference over the weekend, Zelenskyy questioned why the United States and its Western allies, who have vowed to impose swift and tough economic sanctions on Russia if it invades Ukraine, are not already doing so.

Blinken said, "As soon as you impose them, you lose the deterrence" to try to prevent an invasion, and if the West were to announce specific sanctions it would impose, Russia "could plan against them."

The top U.S. diplomat said, however, "Until the tanks are moving" and missiles launched, Western leaders will "try to do everything to reverse" Putin’s mind, "to get him off the course he’s decided."

Reuters reported late Sunday that an initial package of sanctions could include measures to bar U.S. financial institutions from processing transactions for major Russian banks, and placing certain Russians and companies on the Specially Designated Nationals list that would prevent them from using the U.S. banking system, ban them from trade with Americans and freeze their U.S. assets.

On CBS News’ "Face the Nation" show Sunday, Russia’s ambassador to the U.S., Anatoly Antonov, said, "There [are] no such plans" for an invasion.

He said Russia has "our legitimate right to have our troops where we want on Russian territory."

Antonov said Russia has withdrawn some troops from near Ukraine "and nobody even said to us, ‘thank you.’" The West says its monitoring of the terrain near Ukraine shows that Russia has not begun to send its troops back to their bases.

British Prime Minister Boris Johnson said Sunday the United Kingdom will use the "toughest possible" economic sanctions against Russia if it invades Ukraine.

Johnson told the BBC the sanctions would not only target Putin and his associates, "but also all companies and organizations with strategic importance to Russia."

The British leader said, "We are going to stop Russian companies raising money on U.K. markets, and we are even with our American friends going to stop them trading in pounds and dollars."

French President Emmanuel Macron had a telephone conversation with Putin Sunday, with Macron’s office saying afterward that the two leaders agreed on the need to find a diplomatic solution.

Western allies say they are willing to discuss their missile positioning and military exercises in Europe but have balked at Putin’s demand to rule out possible NATO membership for Ukraine and other former Soviet states.

Also Sunday, the U.S. Embassy in Moscow released a statement, urging Americans in Russia to have an evacuation plan.

"There have been threats of attacks against shopping centers, railway and metro stations, and other public gathering places in major urban areas, including Moscow and St. Petersburg as well as in areas of heightened tension along the Russian border with Ukraine," the embassy said. "Have evacuation plans that do not rely on U.S. government assistance."

Some information for this report came from Reuters.