All of them lived before 1917, some of them were beatified and some were denied by the Orthodox Church, but all of them prophesied about the future of Russia — and some predictions, of course, came true. 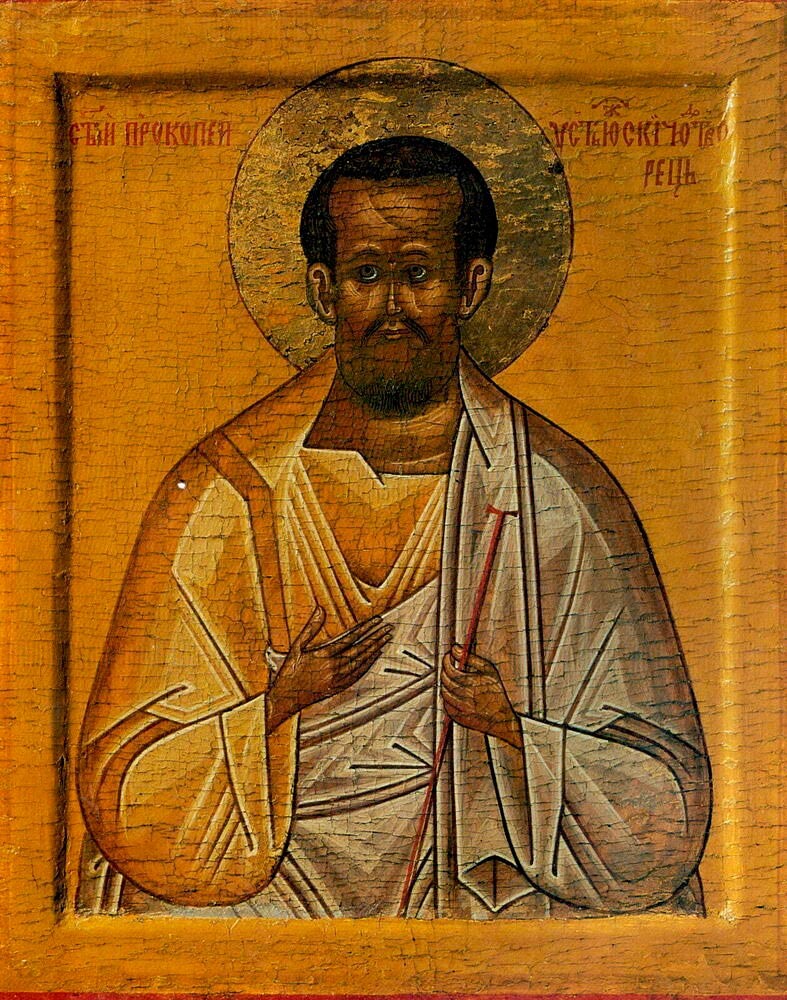 Procopius of Ustyug, who lived in the 13th century, was known as a holy fool — first in Novgorod and then in Veliky Ustyug. He went about in robes, slept on the street — on the ground, on stones and heaps of garbage. He called upon the townspeople to pray and repent, so that Veliky Ustyug wouldn’t suffer the same fate as Sodom and Gomorrah — these cities, according to the Old Testament, were punished with burning rain.

In the Summer of 1290, Procopius again begged the people of Veliky Ustyug to repent. A week later, a fearsome storm broke out. The residents of Ustyug rushed to the church where they found Prokopy praying fervently. According to legend, Procopius saved Veliky Ustyug by driving a "stone cloud" away from the town, to a distance of 20 miles, where "large burning stones fell like rain", Life of Procopius of Ustyug says. 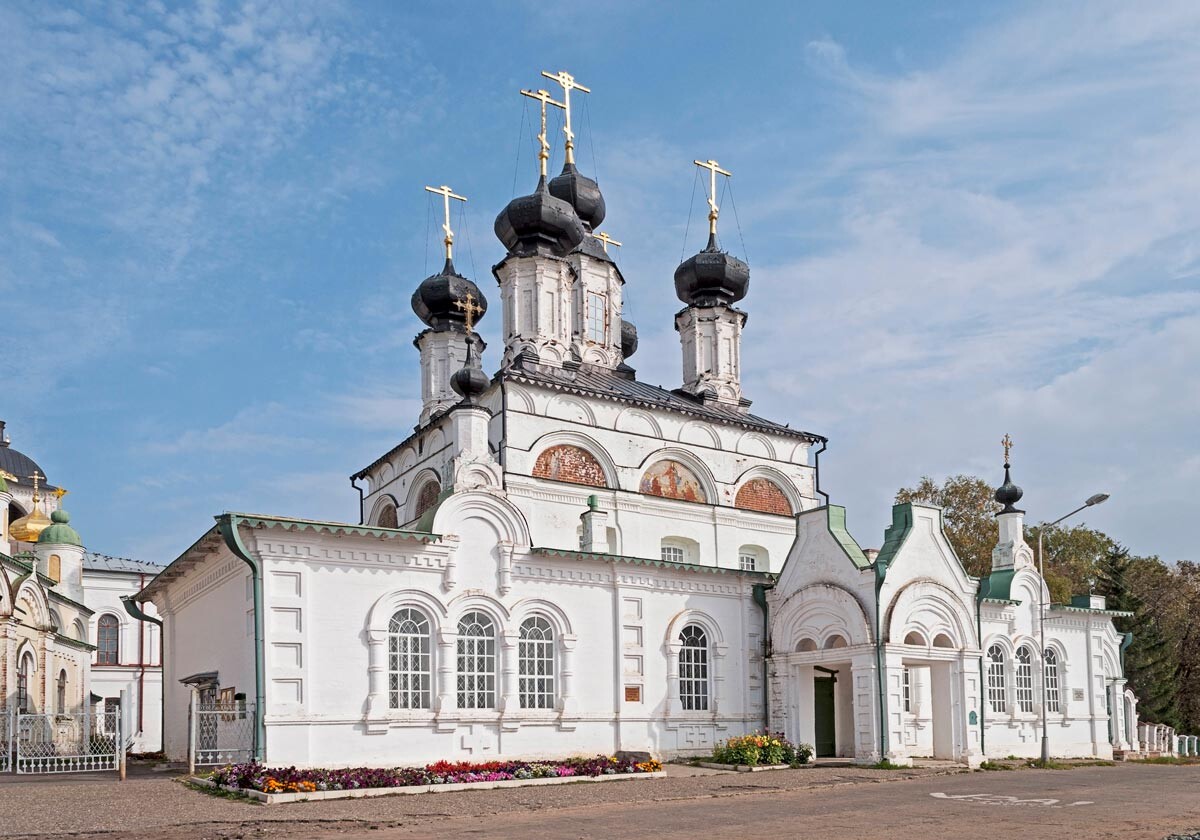 The Cathedral of Saint Procopius in Veliky Ustyug, Russia.

Procopius was not Russian. He fled East Prussia on a ship laden with goods and ended up in Novgorod. Struck by the sight of the multitude of churches and monasteries, he converted to the Orthodox faith, gave away all his wealth and became a fool for God. He later fled Novgorod to escape veneration by the locals.

Procopius lived for about 13 years after the prophecy of the stone rain. The alleged "Great Ustyug" meteorite probably fell on June 25, 1290, near the village of Kotovalovo, about 20 km northwest of the city of Veliky Ustyug. However, so far, no fossil remains of the "stone rain" have been discovered, so it is labeled as "doubtful" in the international register of meteorites. 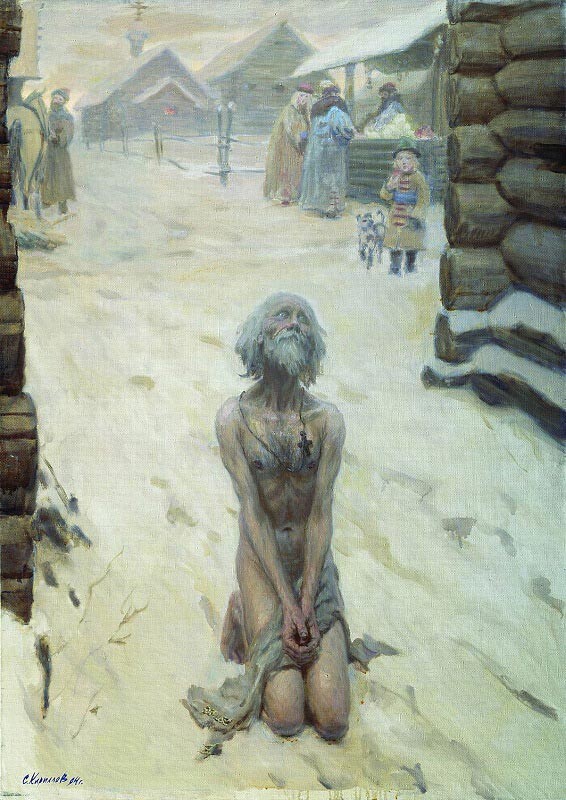 "Basil the Blessed" by Sergey Kirillov

St. Basil the Blessed became known early on as a soothsayer. Vasily worked in a shoemaker’s shop and, one day, a man came in ordering boots "to last a few years". Vassili smiled enigmatically at this moment. When the customer left, Vasily explained that the customer would not even live to wear the boots. And so it happened. This was, however, the lesser of Basil’s predictions.

In the Summer of 1547, Vasily came to the Ascension Monastery in Moscow and prayed fervently before the icons. The next day, it was from the church of this monastery that the devastating Moscow fire began, destroying a third of the city. According to legend, in 1571, young Vasily had predicted the invasion of Khan Makhmet-Girey, who ravaged Nizhny Novgorod, Vladimir and other cities of central Russia — before his arrival, Vasily had a "fiery vision" in the Assumption Cathedral in the Moscow Kremlin.

Vasily was respected and honored by Ivan the Terrible — he allowed Vasily to make jokes about him and call him by the diminutive nickname ‘Ivashka’. Legend has it that when Vasiliy once received a certain drink as a present from the Tsar, he poured out the cup on the ground and when they filled the cup again, believing that the fool did so by accident, Vasily poured out the wine a second time and explained that this was how he extinguished the fire in Novgorod. As it turned out later, on that day in Novgorod, a great city fire was indeed extinguished.

When Vasili died, Tsar Ivan himself carried his coffin to the cemetery and the fool was given a funeral by Metropolitan Macarius of Moscow. Basil was canonized as a saint in 1588, soon after the death of Tsar Ivan. 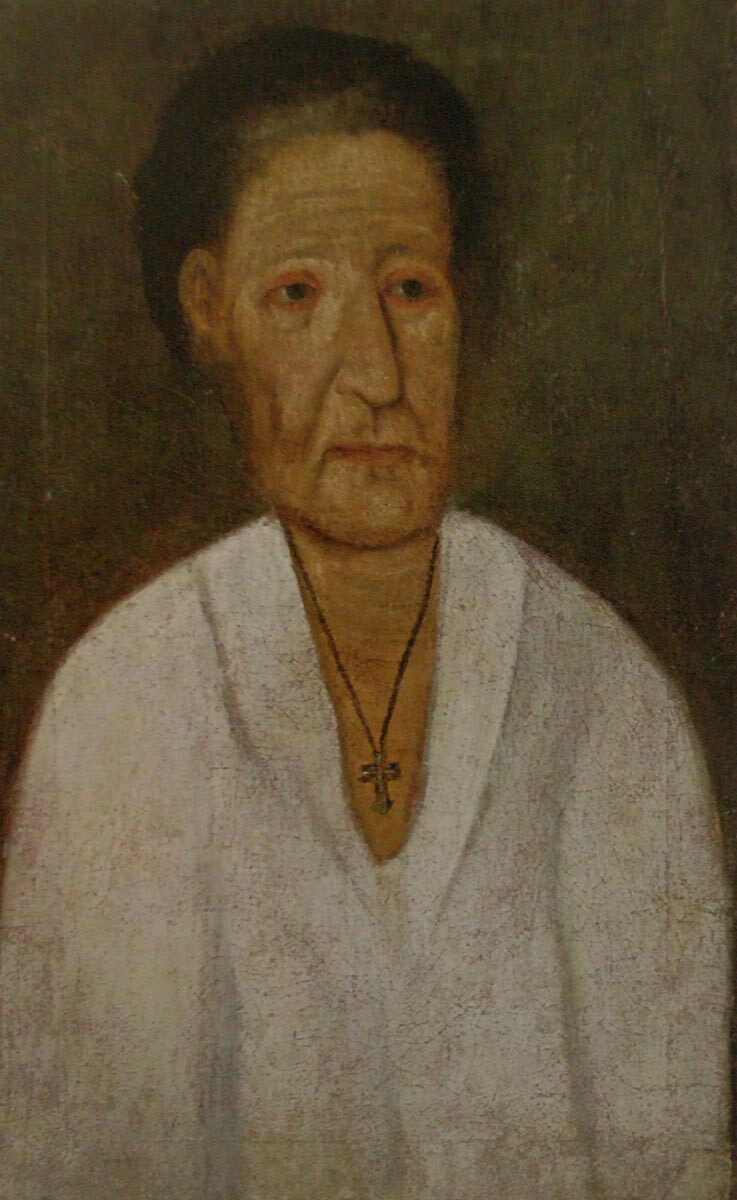 Blessed Xenia of Saint Petersburg, by an unknown artist of the early 19th century

Blessed Xenia (1731-1802) was a holy fool who is venerated and remembered in St. Petersburg. The rumors say she was the wife of lieutenant colonel and court chanter Andrei Petrov, who died when Ksenia was 26 years old. After her husband’s death, Ksenia chose the path of a fool for God.

Xenia attended the funeral of her husband dressed in his clothes and no longer responded to her name, answering that Xenia had died and she was now Andrei Fedorovich (her deceased husband). After the funeral, Xenia decided to become homeless and sold her husband’s house, giving all the money to the church. When her husband’s clothes had decayed, Xenia chose to wear a green skirt and a red blouse — the colors of the military uniform her husband wore.

Xenia lived by alms. "Give me the tsar on a horse!" was her usual request, meaning a copper copeck. She took no more. When a store owner gave her a few gold coins discreetly, Xenia returned them, stubbornly insisting for just a copeck.

Her most famous prophecies are about the deaths of the tsars. Just a few days before the end of 1761, the inhabitants of the capital heard Xenia shout: "Make bliny, soon the whole Russia will be making bliny!" On December 25, Empress Elizabeth died suddenly. It is believed that Ksenia foresaw her death, because bliny is a traditional bereavement meal in Russia. 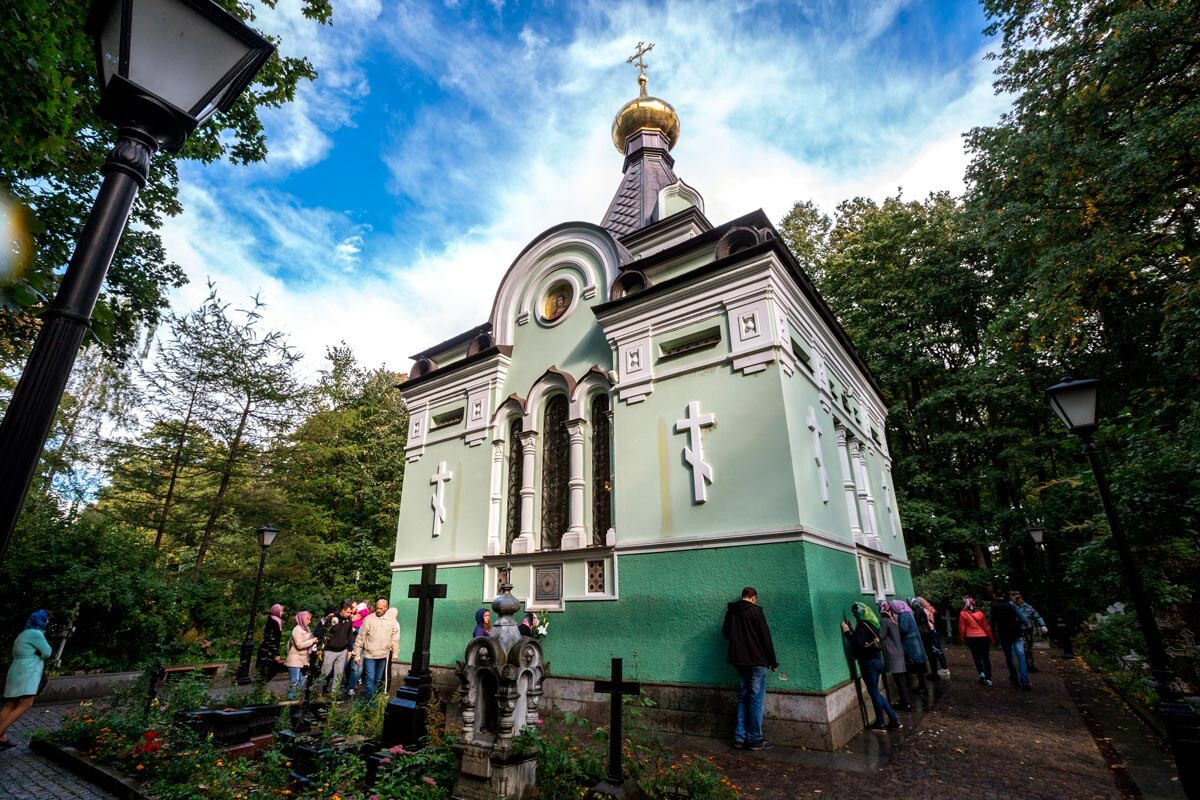 The chapel on the grave of Xenia of Saint Petersburg

In the Summer of 1764, Xenia was often seen crying in the streets. "There is blood, blood, blood! The rivers are filled with blood, the channels are bloody, there is blood, blood," she was saying. Later, it became known that, in July 1764, in the Schlisselburg fortress, the former Emperor Ivan VI was stabbed to his death during an attempt to escape.

There is no record of Ksenia’s death, but it allegedly happened in the early 19th century. Her grave in the Smolenskoe Cemetery became a place of pilgrimage — people used to take away the earth and sand from her grave hill. Subsequently, a chapel was erected at the site of Xenia’s grave. 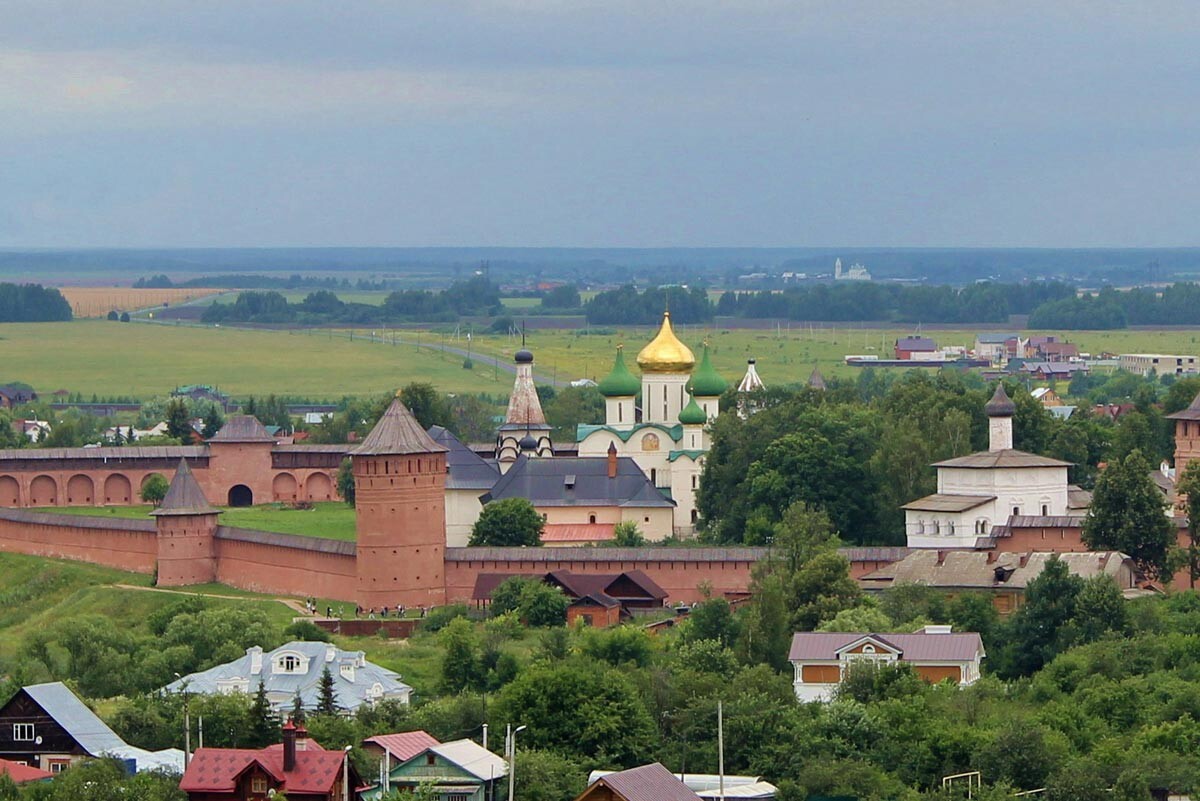 There are no portraits of Monk Abel. This is Suzdal Spaso-Evfimiev monastery, where he ended his days.

The only document about monk Abel is the case opened in the Ministry of Justice in 1796, concerning the said monk authoring a book of prophecies on 67 pages. The peasant Vasily Vasiliev, who called himself monk Abel, lived in the second half of the 18th century. In the 1780s, he took monastic vows in the Valaam Monastery, but he strayed away from there and continued to wander. The book of prophecies found in Abel’s cell at the Nikolo-Babaev Monastery, where he stayed in 1796, stated that the Empress Catherine II would die in eight months.

Abel was arrested — such prophecies about the monarch were a criminal offense. The prediction was reported to the Empress. Abel was interrogated by the Secret Expedition, the organ of state security, and sent to the Shlisselburg fortress. But his prophecy came true when Catherine died in November 1796 and Paul I became the Emperor. Abel was released at Paul’s personal order. However, he was soon arrested in Moscow for predicting the future for money.

In 1798, Abel was exiled to the Valaam Monastery, where, two years later, a new book of predictions was discovered in his cell. For this, Abel was locked up in the Alexeevsky ravelin of the Peter and Paul fortress and, after the death of Paul I, he was exiled to the Solovetsky monastery. There, he supposedly predicted the war of 1812 and the burning of Moscow, after which he was released and continued to wander. Abel spent about ten years wandering and prophesying and, in 1826, was again thrust into the Suzdal Spaso-Evfimiev monastery where he died in 1841, already in his 80s. 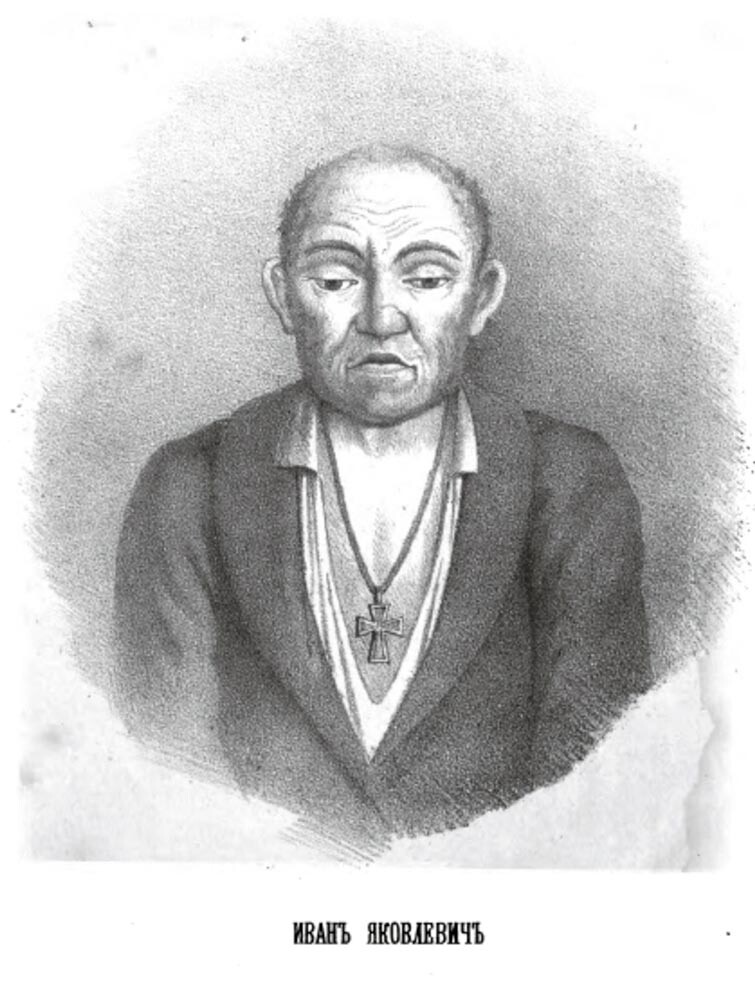 The "last Russian holy fool" Ivan Koreysha, a famous clairvoyant of the first half of the 19th century, spent most of his life in Moscow’s Preobrazhensky Hospital for the mentally ill. Ivan was educated in a seminary, then worked as a teacher, but, at age 22, obeying an inexplicable inner call, he began to wander. After three years of wandering the Russian monasteries, he returned to his native Smolensk and settled in a bathhouse in his backyard, where he sang spiritual psalms and became famous as a holy fool. Upon his return to Smolensk, Ivan Yakovlevich discovered in himself the ability of a clairvoyant.

He foretold to both common people and noblemen, mainly about life and death of their relatives, and almost all predictions were accurate. Koreysha also prophesied about major historical events. In the Winter of 1811, when asked if he was cold in his rags, Koreysha said: "Wait a year or two, it will be hot, and you all will be freezing, too." And, thus, predicted the siege of Smolensk by Napoleon’s army.

In 1813, Ivan Yakovlevich was declared insane and isolated in Smolensk hospital and, in 1816, Koreysha was transferred to the Moscow Madhouse, as the psychiatric hospital in Preobrazhenskoe was then called, allegedly because he had denounced the corruption of Smolensk officials. He soon became famous in Moscow, as well — Koreysha predicted that his guard’s daughter would be cured from measles. The astonished guard spread the rumor about the clairvoyant around Moscow and soon Koreysha was once again getting visitors. The governor-general’s wife also came to visit him and was impressed by Ivan Yakovlevich’s abilities (he guessed exactly where her husband was staying that evening). After this visit, Koreisha’s confinement in the asylum improved. 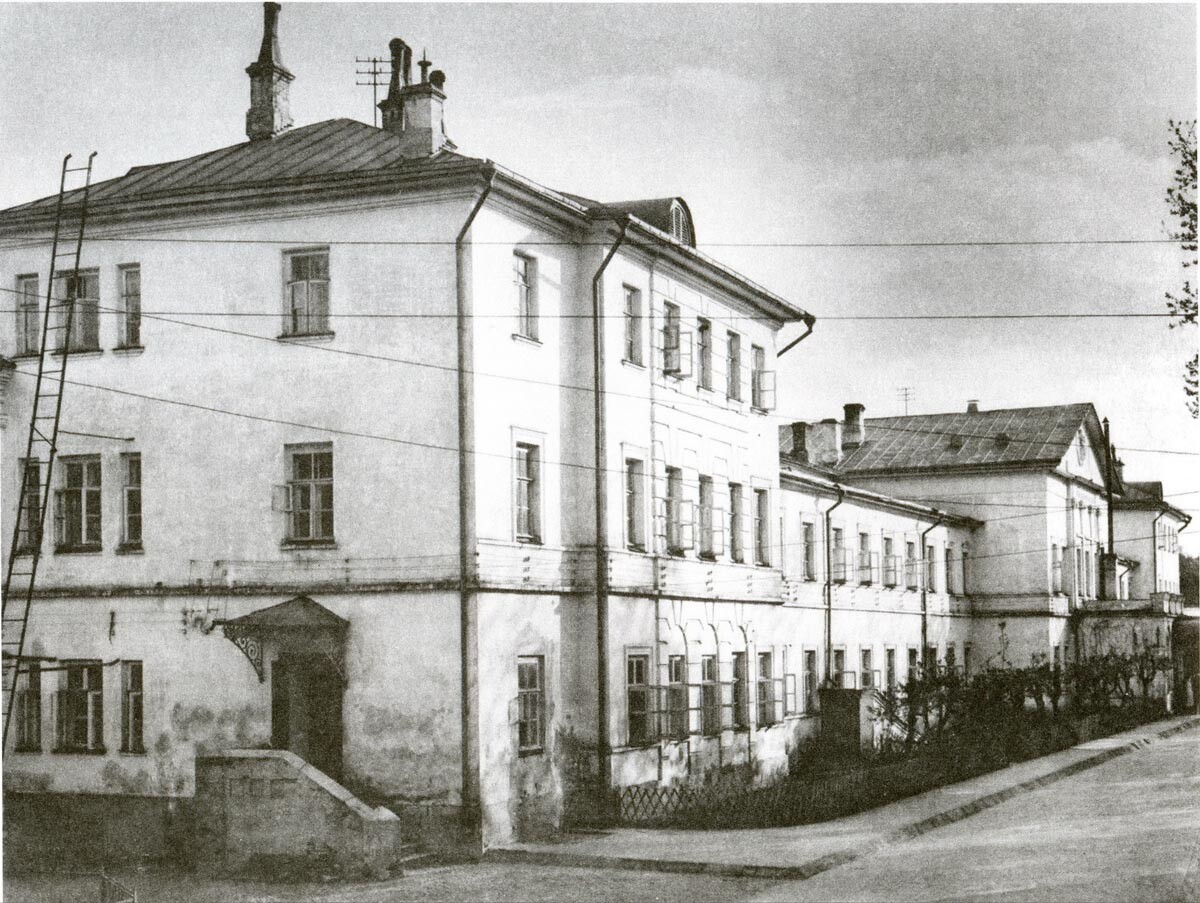 The Preobrazhenskoye Psychiatric Ward circa 1910

Koreisha was isolated in a separate room, which, at his request, was almost never cleaned. Dr. Desmoulins, who visited the hospital in 1856, when Koreisha was an old man, wrote that his room "resembled a den of an animal rather than a medical ward. Ivan Yakovlevich himself was lying on the floor, on a layer of sand, covered with a blanket so ragged and dirty that the mere sight of it made me sick to my throat".

Opposite his couch was the visitor’s couch. By the doorway in front of the room, there was a mug for donations to the hospital. A few years later, the hospital management realized that Koreysha’s popularity should be used to generate income. Vasily Sabler, the hospital’s chief physician, said: "We are very poor; if it were not for Ivan Yakovlevich, I don’t know how we would have made ends meet." A fee for visiting Koreisha was established — 20 silver kopecks. The funds were used to improve the hospital where Koreysha was held with the diagnosis "insanity on the grounds of excessive fascination with reading". The official church did not recognize him as blessed — and did not canonize him after his death. 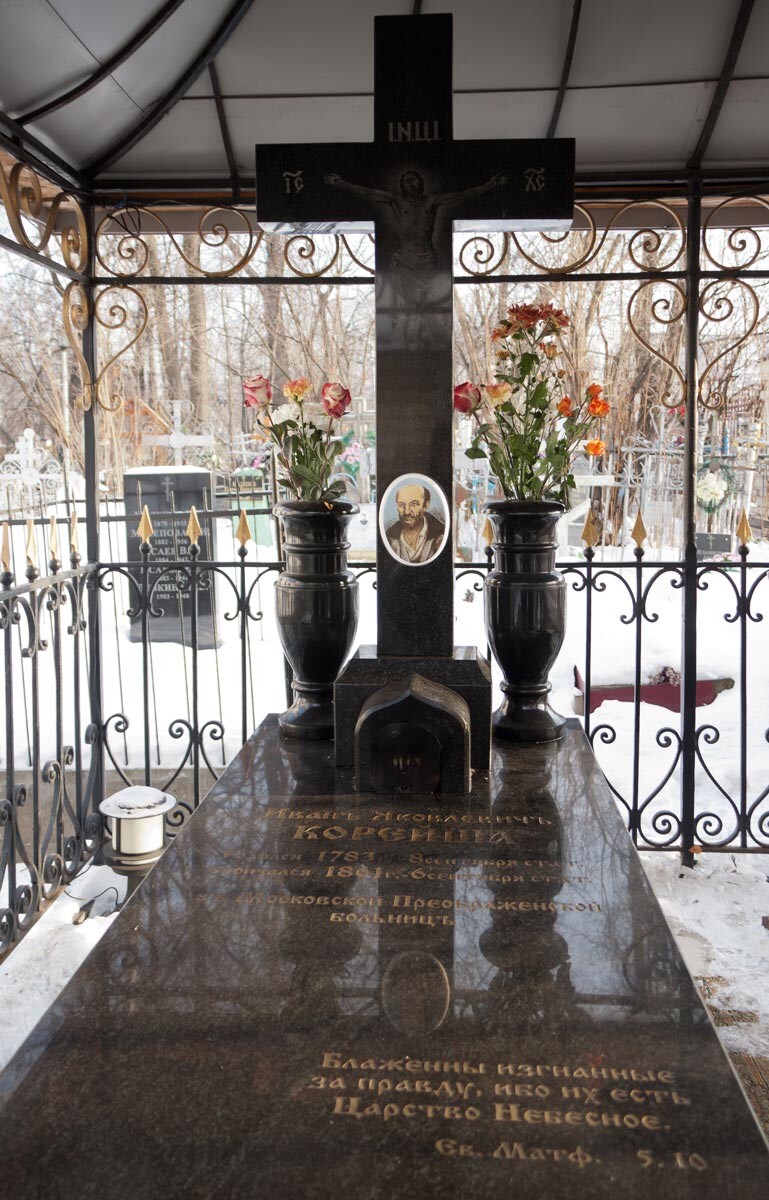 Toward the end of his life Koreysha became a national celebrity. He answered the questions of his visitors, often vaguely and metaphorically, and also made general predictions — for example, before the Eastern (Crimean) war, Koreysha was saying it was necessary to dry breadcrumbs and prepare bandages. Ivan Yakovlevich appears even in the works of Fyodor Dostoevsky and Nikolai Leskov. He died in 1861 and was buried not far from the hospital, in Cherkizovo village in Moscow. His grave was a place of worship for many years after his death and is still venerated today.

Our website and social media accounts are under threat of being restricted or banned, due to the current circumstances. So, to keep up with our latest content, simply do the following: