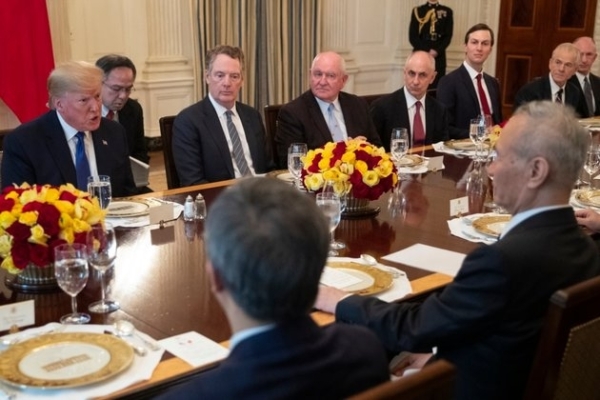 WASHINGTON — China has failed to meet its commitments under a two-year Phase 1 trade deal that expired at the end of 2021, and discussions are continuing with Beijing on the matter, Deputy U.S. Trade Representative Sarah Bianchi said on Tuesday.

’You know, it is really clear that the Chinese haven’t met their commitment in Phase 1. That’s something we’re trying to address,’ Bianchi told a virtual forum hosted by the Washington International Trade Association.

In the deal signed by former President Donald Trump in January 2020, China pledged to increase purchases of U.S. farm and manufactured goods, energy and services by $200 billion above 2017 levels during 2020 and 2021.

Through November, China had met only about 60% of that goal, according to trade data compiled by Peterson Institute for International Economics senior fellow Chad Bown.

The deal prevented the escalation of a nearly three-year trade war between the world’s two largest economies but left in place tariffs on hundreds of billions of dollars of imports on both sides of the Pacific.

The U.S. Census bureau is expected to release final 2021 trade data for goods and services on February 8, which will provide specifics on the shortfall.

Chinese customs data showed the country’s 2021 trade surplus with the United States surged 25% to $396.6 billion after declining for two straight years, with exports to the United States up 27% and imports of American goods rising 33%.

A spokesperson for China’s Embassy in Washington said Beijing has worked to implement the Phase 1 agreement ‘despite the impact of COVID-19, global recession and supply chain disruptions.’

’We hope the U.S. can create a sound atmosphere and conditions for expanded trade with China. The two trade teams are in normal communication,’ the spokesperson said in an emailed statement.

Bianchi, whose portfolio includes China and Asian trade matters, did not identify steps the Biden administration is taking to hold China to its Phase 1 commitments, which also include some increased Chinese market access for U.S. agriculture, biotechnology and financial services.

’It’s not our goal to escalate here. But certainly, we’re looking at all the tools we have in our toolbox to make sure they’re held accountable,’ Bianchi said, without providing details.

Bianchi, who served as an economic adviser in the Obama administration and took office in October, said the United States was trying to foster a ‘stable relationship’ with China, but the two countries are at a ‘difficult stage in the relationship.’

’To be super-candid, the conversations are not easy. They’re very difficult. But you know, from my perspective, what’s important is that we’re having conversations and they will be unflinchingly honest,’ Bianchi said.

She said USTR was emphasizing that China’s state aid to companies and non-market economic policies and practices are a ‘serious threat to American economic interests.’

Bianchi said USTR was consulting closely with Congress on the Biden administration’s planned Indo-Pacific Economic Framework to re-engage economically with the rest of Asia, and more details would be released in coming weeks.

The framework will not include improved market access for countries that sign up, Bianchi said, but said the United States will be seeking high standard ‘binding commitments’ from trading partners in negotiations on digital trade policies, labor rules, environmental standards and supply chain resilience.