Islamic State Out to Prove It’s More Than Its Leader 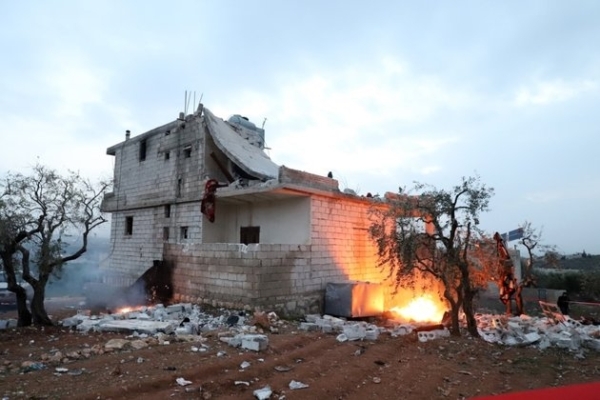 Washington — The Islamic State is so far showing few signs of faltering, just days after U.S. special operation forces dropped into northwest Syria and surrounded the terror group’s leader, who they say then blew himself up without a fight.

Intelligence agencies and independent analysts tracking IS on social media have yet to find any official acknowledgement of the death of Amir Muhammad Sa’id Abdal-Rahman al-Mawla, or word of a replacement.

Instead, they say IS social media operatives and followers have mostly acted as though the loss of the terror group’s second leader in less than three years is immaterial.

"It’s more business as usual, continuing to claim attacks in Africa, Afghanistan, Syria," according to Raphael Gluck, the co-founder of Jihadoscope, a company that monitors online activity by Islamist extremists.

"[It] proves their point that the ISIS dream doesn’t die with the killing of their leader," he added, using another acronym for the terror group.

In one video from the IS-run Amaq News Agency, and shared by the SITE Intelligence Group, IS propagandists show fighters with the terror group’s West Africa Province (ISWAP) overrunning a Nigerien military post.

A second Amaq video, posted a couple of days later and shared by SITE, shows the wreckage of a vehicle bombed by ISWAP fighters in near the Nigerien town of Marte.

Just a day after al-Mawla’s death, IS’ Central African Province claimed it freed 20 prisoners in an operation in eastern Congo.

Some analysts who study IS say while much of what the terror group is putting out on social media is about branding and trying to maintain its fearsome image, some of it is also a reflection of realities on the ground.

’The organization is ticking along quite nicely, even in this period now,’ Hans-Jakob Schindler, senior director of the New York and Berlin-based Counter Extremism Project (CEP), told VOA.

"Yes, you killed the leader. That’s a big blow," said Schindler, who spent three years overseeing the United Nations team that tracked IS, as well as rival terror group al-Qaida and also Afghanistan’s Taliban. "But the organization itself is not strategically weak ... a network-based organization can always replace a leader."

Accounts from countries closely following the fortunes of IS would seem to back that up.

Intelligence shared with the United Nations for a report released past Friday warned that despite some serious setbacks, IS "continues to operate as an entrenched rural insurgency in Iraq and the Syrian Arab Republic, exploiting the porous border between the two countries, while maintaining operations in areas of low security pressure."

The U.N. report, compiled prior to al-Mawla’s death, also said IS commanded a fighting force in Iraq and Syria of as many as 10,000 followers and that the group maintained access to about $50 million in cash reserves.

U.S. intelligence estimates suggest IS may enjoy even more support, with up to 16,000 fighters spread across the two countries.

At the same time, IS affiliates have continued to grow stronger, particularly in Africa and in Afghanistan, where IS-Khorasan province has doubled in size in recent months, to close to 4,000 fighters.

Intelligence provided to the U.N. from member states further indicates that IS-Khorasan now "controls limited territory in eastern Afghanistan" and that it is "capable of conducting high-profile and complex attacks.’

The same intelligence further suggests the IS Afghan affiliate has been getting an infusion of cash from IS core in Iraq and Syria, perhaps as much as $500 million over the past six months.

Under timelines shared by U.S. Defense Department officials, IS-Khorasan could also be just three months away from regenerating the capabilities required to conduct attacks on the West.

Timeline for Potential Attacks by Islamic State, Al-Qaida Getting Shorter

The question, though, for intelligence agencies and analysts is, to what extent was the Islamic State’s al-Mawla responsible for the terror group’s global successes?

Senior U.S. administration officials, briefing reporters on the condition of anonymity to discuss details of the raid that ended al-Mawla’s life, said the terror leader played a pivotal role, having a hand in operations like the one that attempted to free upwards of 4,000 jailed IS fighters from a prison in northeast Syria last month, and also coordinating with IS affiliates, all through a network of couriers.

US Says IS Leader Killed Himself in Act of Cowardice

’We anticipate that this is going to lead to disruption within ISIS,’ one senior administration official said following the raid in Idlib.

Some analysts, like the Counter Extremism Project’s Schindler, argue al-Mawla was not much more than a placeholder for the group.

"As far as the function of the center of ISIS is concerned, i.e. brand management, making sure that the affiliates are on target of what they’re supposed to be doing, encouraging attacks in the West, he did not play a role whatsoever," Schindler told VOA. "All of the strategic decisions that helped the Islamic State to survive and thrive after the fall of the physical caliphate ... were done beforehand so long before 2019.’

Others argue that while al-Mawla, who also went by multiple other names, including Abu Ibrahim al-Hashimi al-Qurashi and Hajji ‘Abdallah, may not have presented himself as a charismatic figurehead, he was nonetheless effective.

"If he was a weak leader, I don’t think the Islamic State would have remained cohesive, particularly the branches or the provinces" said Bill Roggio, a senior fellow at the Washington-based Foundation for the Defense of Democracies.

"He’s done a pretty decent job in keeping the group together under some extremely difficult times," Roggio told VOA, adding that the way al-Mawla blew himself up suggests the terror group will not face a leadership vacuum.

"These guys, they don’t retire, they don’t go off into the sunset," he said. "I think knowing that someone else would take up the mantle would give him more reason to be able to pull the trigger."