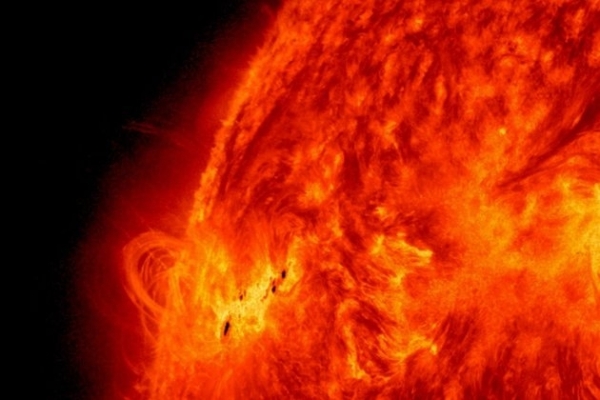 Washington — As if we didn’t have enough to worry about: Some scientists are warning about the inevitable catastrophic effects on modern life from a super-sized solar storm.

These outbursts from the sun, which eject energy in the form of magnetic fields and billions of tons of plasma gas known as ‘flares,’ are unpredictable and difficult to anticipate.

The Earth suffers a devastating direct hit every century or two, according to recent analysis of scientific data and historic accounts. In the past, these were mainly celestial events with spectacular aurora light shows but scant impact on humanity. Modern technology, however, is vulnerable to the shocks from extreme solar storms.

’It’s not as rare as an asteroid or a comet hitting the Earth, but it’s something that really needs to be dealt with by policymakers,’ said Daniel Baker, distinguished professor of planetary and space physics at the University of Colorado. ‘Certainly, in the longer term, it’s not a question of if but when.’

Astrophysicists estimate the likelihood of a solar storm capable of causing catastrophe to be as high as 12% in a decade.

’It’s just a matter of time,’ according to professor Raimund Muscheler, chair of quaternary sciences in the geology department of Lund University in Sweden. ‘One has to be aware of it and one has to calculate the risks and be prepared as much as possible.’

A new study of ancient ice samples conducted by the Swedish scientist concludes that a previously unknown, huge solar storm about 9,200 years ago would have crippled communications if it had hit Earth in modern times.

’A failure in one kind of sector can propagate through the system and affect a lot of other things, and I think that’s probably the thing that worries me most about storms is that they can be widespread and can have consequences in all kinds of systems that that we might not otherwise think about,’ Baker said. 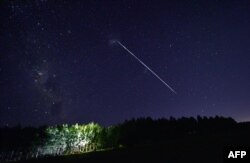 FILE — This time-exposure image shows a trail of a group of SpaceX’s Starlink satellites passing over Uruguay, some 185 km north of Montevideo, Feb. 6, 2021. Up to 40 SpaceX high-speed internet satellites were knocked out of orbit by a geomagnetic storm shortly after launch.

A relatively minor solar storm, that caused a disturbance in the Earth’s magnetic field, is blamed for the loss of as many as 40 of the 49 Starlink internet-access satellites launched February 3 from the Kennedy Space Center in Florida.

When the sun shoots out energy, it affects Earth in phases. The first occurs here eight minutes after the solar event 150 million kilometers away, the time it takes light to travel from the sun.

The initial trouble occurs on the daylight side of the planet from the early arriving X-rays, which dramatically disrupt the ionosphere — where the Earth’s atmosphere meets space — and radio communications. They also create additional drag on some satellites, degrading their orbits, which is what happened to the Starlink satellites.

In subsequent minutes and hours, highly charged particles unleash a radioactive storm, posing a danger to astronauts in orbit.

The third phase, known as the coronal mass ejection — gas and magnetic field explosions on the surface of the sun — disturbs the planet’s magnetosphere, lighting up the sky and inducing electrical currents on the surface, which can overload power grids and speed corrosion of pipelines.

’The geomagnetic storm can actually cause transformers to burn through if they are not adequately protected,’ said Muscheler of Lund University.

FILE — The sun rises over Mount Hood in the aftermath of the largest solar storm in years, over Portland, Oregon, March 8, 2012.

The power industry in North America has taken steps in recent years to harden its infrastructure to protect from the dangerous surges. U.S. government agencies have a program to deploy emergency transformers to replace those that would fail.

’Although the U.S. government has estimated the cost of a severe space weather event to be in the billions, this worst-case scenario is typically not considered by most policy planners,’ said Sangeetha Abdu Jyothi, assistant professor in the computer science department at the University of California, Irvine. ‘In short, the risk is well-known, but not always considered during design and planning in most cases.’

Long-distance fiber-optic and submarine telecommunications cables at higher latitudes, where the Earth is more exposed, can also suffer serious damage.

’The U.S. is highly susceptible to disconnection from Europe,’ Jyothi wrote in a recent research paper. ‘Europe is in a vulnerable location but is more resilient due to the presence of a larger number of shorter cables. Asia has relatively high resilience with Singapore acting as a hub with connections to several countries.’

The sun frequently hurls big flares at Earth, but most are not large enough to wreak havoc or don’t strike the planet directly. But, as SpaceX experienced this week, even some of the less severe flares can neutralize satellites.

’The timing is unfortunate for SpaceX,’ said Bill Murtagh, program coordinator for the Space Weather Prediction Center of the National Oceanic and Atmospheric Administration. He added that the 1,500 SpaceX satellites already in orbit were not affected.

A big storm can also trigger ozone depletion, meaning there are possible effects on the terrestrial climate, according to atmospheric scientists.

The societal reactions to the solar outbursts of past centuries now seem quaint, although they were sensational events at the time.

When an intense geomagnetic storm hit the Earth in September 1859, known as the Carrington Event, telegraph systems across North America and Europe failed and some operators reported receiving electrical shocks.

The Halloween Storms of 2003 affected more than half of the orbiting satellites, and disrupted aviation for more than a day because planes could not be accurately tracked. Electrical service was also knocked out in parts of Europe for several hours, and transformers in South Africa were permanently damaged.

Since the Carrington Event, state-of-the-art communication has gone from the telegraph to the internet.

’Are we ready for a Carrington class event? No, we still have work to do,’ Murtagh of NOAA told VOA.

’While the frequency of climate disasters is increasing gradually, we will be caught by surprise by an extreme solar event that causes significant disruptions. Most people alive today have never experienced an extreme space weather event that has a global impact during our lifetime,’ Jyothi of University of California-Irvine told VOA.

She also warned that solar superstorms could cause large-scale internet outages covering the entire globe and lasting several months. 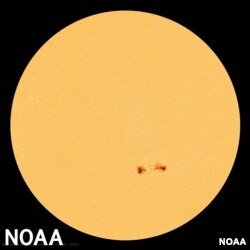 The geomagnetic storms tend to happen more frequently when there are more sunspots (each such freckle on the sun being about the size of Earth). The sun is heading into a new cycle, meaning there is an increasing likelihood of disruptive events as this cycle ramps up to its predicted peak in July 2025.

One bit of good news: Solar scientists predict this cycle will be less intense than the most active cycles of past centuries.

Society in the 21st century, however, seems unprepared for the consequences of cascading inter-connected technological failings likely to be caused by future major storms.

’The sun is the giver of life, but it can be cruel too — especially on the technology we rely on for so much of what we do today,’ Murtagh said.

Some other governments seem less focused on the issue.

Baker recalls a letter he received from a concerned woman in France who contacted officials there for advice on how to prepare for a major geo-magnetic storm.

’We suggest you buy a chocolate cake, eat it and wait for the end of the world,’ she was told, according to Baker.