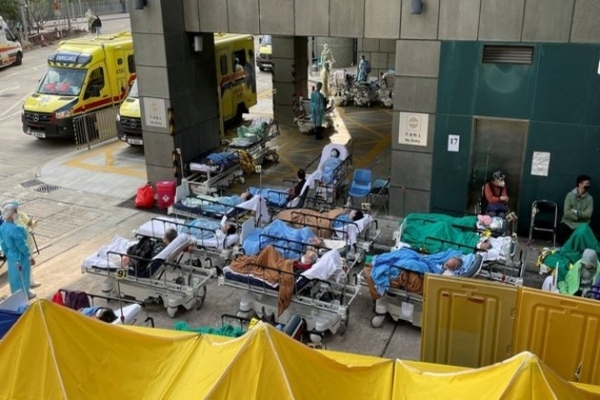 Of the 46 deaths (recorded from December 31 when the fifth wave began to last Friday) analyzed by CHP, 40 people had not been inoculated against the virus, Hong Kong Free Press reported citing CHP’s Chuang Shuk-kwan.

With four-digit daily COVID cases recorded in the past week, the fifth wave has pushed the government’s pandemic work into overdrive. The unrecorded fatalities have been added to backdated death counts by the authorities.

The number of COVID-19 deaths recorded since the beginning of the year stands at 75, as per Hong Kong’s COVID-19 dashboard.

Hong Kong is in the midst of its worst COVID outbreak since the epidemic began more than two years ago, fuelled by the less lethal but more transmissible Omicron variant, the media outlet reported adding that another 6,067 coronavirus cases and 14 deaths were confirmed on Sunday.

Even as COVID-19 flooded the world, Hong Kong believed that its pandemic policies had kept the city safe, Al Jazeera reported.

In the wake of the imposition of national security law, Hong Kong pursued a zero-tolerance plan that aimed to keep the virus at bay by keeping people apart. The city barred visitors, imposed the world’s longest and most stringent quarantines on travelers, and pursued aggressive contact tracing tactics with sudden lockdowns and mandatory tests.

Hong Kong’s insistence on sending all positive cases to hospitals, irrespective of the severity, has led to at least one hospital being so overwhelmed it was forced to move patients on gurneys outside, lining them up in the parking lot, reported CNN.

Meanwhile, a raft of tightened restrictions and targeted lockdowns have led many experts and residents to question the sustainability of such an approach as the city enters the third year of the pandemic.