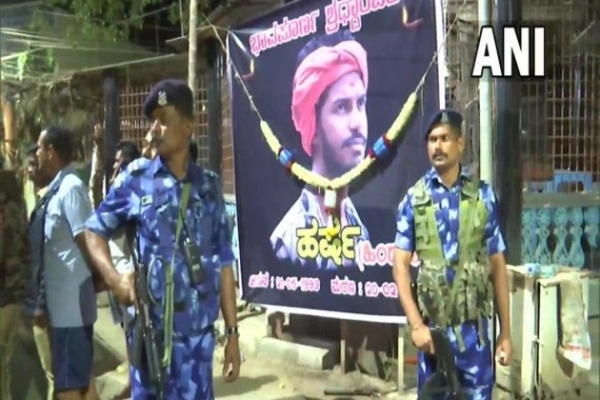 Shivamogga (Karnataka) [India], February 21 (ANI): The family grieving the death of a 26-year-old Bajrang Dal activist, Harsha, in Karnataka’s Shivamogga on Monday demanded justice while the father of the deceased said that such an incident should not have happened with anyone.

"This kind of incident should not have happened to anyone. Culprits should be punished," said Nagaraj, father of the deceased.

While an emotional sister talking to ANI said "I ask only one thing, justice for my brother’s death.""I feel that my brother has gone outside, he will come back," she added.

His brother, Praveen said "My brother was an active member of the Sangathan. He only used to think about Hindus and that is what killed him. Last night, we were informed that he has been admitted to a hospital. We want strict to be taken against the culprits."Meanwhile, a grieving mother said Harsha died for the nation.

"He was born for the nation and he died for the nation. I am proud of my son. My son has made a name. He is a Hindu Tiger, he had a lot of respect from others," she said.

However, state Home Minister Araga Jnanendra on Monday announced three persons have been arrested in connection with the case.

Briefing mediapersons here, the Home Minister said, "We have not yet received any final report related to arrests. Three persons were arrested and some people were taken into custody. As per my information, five people are involved in this murder. For now, we do not want to disclose anything further. Inquiry is going on. After the investigation, the information will be shared."A 26-year-old Bajrang Dal activist Harsha was allegedly murdered at around 9 pm last night in Shivamogga. Security was tightened in the city following the incident. (ANI)